How many see UFOs? How many report them?


I had posted the latest Canadian UFO Survey results, and was surprised when someone questioned that only ten percent of all witnesses report their experiences.

(Not that he had offered any alternative, just that he doubted the value was correct.)

I realized that most people in ufology these days have likely never seen poll data on UFOs, so I went looking for results from Gallup, Decima, and others.

Of course, I've posted about such things many times, but hey, no one listens to me.

And them in 1997, MUFON published an article concerning the Ufology Research poll of Canadians about UFOs.

(Yes, there was a time when MUFON liked me.)

So, there are some stats to  back up that about ten per cent of the population believe they have seen UFOs, and that only a small percentage of UFO witnesses report them, as one might expect given the climate of ridicule that is still evident.

And one this that came out of that early study was the note that about the same number of people were as likely to report their UFO experience to a UFO group as to not report it at all. But they would rather report it to a government agency. 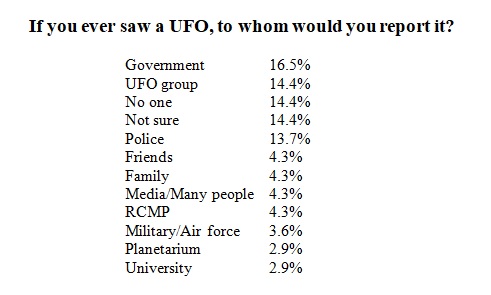 Maybe the US Navy will be getting some UFO reports, after all.

I would love to do a more rigorous set of polls on this, with cooperation from many UFO groups so that we can get a better sample size and hopefully more refined results.

But that's not likely to happen.