A reporter asked me recently to describe the best UFO case that had ever occurred in Western Manitoba. And that made me rack my brain somewhat.

The most curious Westman event that came to mind was the incident at Rivers, Manitoba, in 1967. It involved multiple witnesses, many of whom were military personnel, plus alleged physical effects and traces. Furthermore, it's a case that is rarely mentioned, yet has many elements of a classic of ufology. 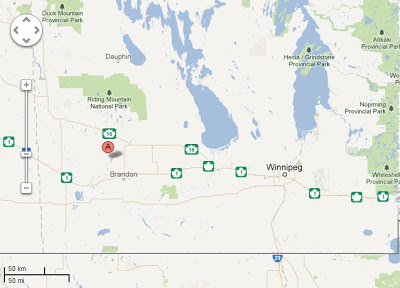 The report, in the National Archives, notes that the incident occurred at 0645Z (12:45 am) on August 28, 1967. There were six witnesses, three of whom were military personnel: LAC J. Hebert, LAC K. Taylor and CPL A Fedun, all stationed at CFB Rivers, plus civilians Judy Ross, Leslie Dowdell and Jacqueline Dowdell, all of Rivers. Hebert and Ross were driving one mile east of Rivers, Taylor was 8 miles east, Fedun was in the town, and the Dowdells were at a different location in the town. In other words, we have six observers scattered across four different locations. 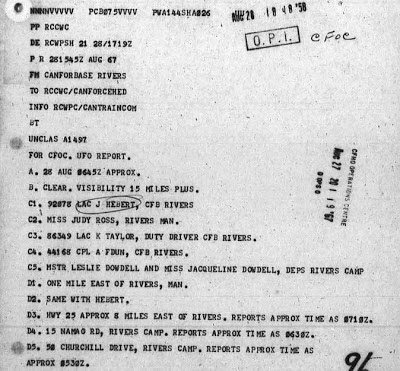 But that’s not all. Two more military personnel, CPL K. McArthur and G. Stefanson, a Commissionaire, both at two additional different locations on the Rivers base, reported hearing an “explosion” that rattled windows and created “vibrations.”

Here’s the sequence of events:


The first problem to deal with is the discrepancy with regard to the differing times of observation. Even if we assume the Dowdells' time of observation is an hour out, there's still the matter of reconciling 0630Z to 0710Z, at least half an hour. It's reasonable to assume that the military observers would be accurate in their times, so it seems possible there was more than one object seen. More on this later.

We also have some insight into the actual investigation of the case by military personnel. The Archives file notes:


LAC Heberts car detained at ME section. Body repairman states light dust on top of car is unlike any other in his experience. There is some bubbling of paint on top. This incident reported to TCHQ by base duty officer. TCHQ investigating team scheduled to arrive Rivers 1200 hours this date. 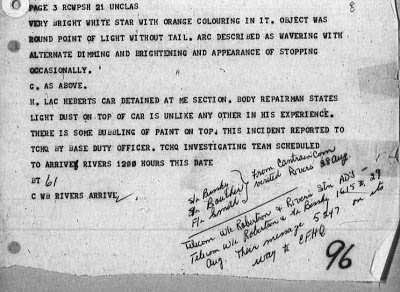 There are a number of things to note here. First, Hebert's report was taken seriously enough that they impounded his car as evidence. Second, the military vehicle repairman noted there was an odd dust on the car and bubbling of paint on the roof. Third, this was considered such a significant case that "TCHQ" - the RCAF Training Command Headquarters in Winnipeg sent a team to investigate. This team was the Canadian equivalent of the USAF Project Blue Book.

Who were they? Well, although this isn't part of text of the telexed report to DND, there are handwritten notes on the documents. The handwritten script reads:

In other words, they were immediately dispatched to the scene. Since Rivers is about four hours' drive from Winnipeg, if they were to arrive by noon, they would have to have left Winnipeg no later than about 0800 hours, or within the hour that the sightings were reported to CFB Rivers. They had to have been roused in the wee hours of the morning, packed into a military transport and driven out.

This also says something about the team. To have been essentially at the ready, they would have to have been identified as a team and prepared for "action." Even arranging a transport at short notice is impressive in itself.

Of course, the makeup of the team and its readiness is not completely surprising. August 1967 was just three months after the Falcon Lake incident in Manitoba, only about 400 kilometres to the east of Rivers. It's sensible, then, that Squadron Leader Paul Bissky of CFB Winnipeg was part of the investigation team. Bissky was a devout skeptic; in an official document about the Falcon Lake case, he described how he attempted to get UFO witness Stefan Michalak drunk at the Falcon Lake hotel bar in order to break his story about being burned by a flying saucer. As for the other two team members, they don't seem to have popped up anywhere else.

An additional handwritten note on the page reads:

In addition to the available documents, we know that there were two telephone conversations between both the CFB Rivers commander and Bissky with Wing Commander D. F. Robertson at Canadian Forces Headquarters in Ottawa. Roberston was also involved in the Falcon Lake case and received all materials relating to that case investigation as well.

The report of the TCHQ team's investigation read:


TCHQ team conducted short investigation.at Rivers and found:
No further action contemplated on this case at this time.

So the team drove out all the way to Rivers but did only a "short investigation." They did only a visual inspection of the dust on the car, without taking any samples for laboratory analyses. Their opinion outweighed that of the carpool jockey, who had certainly seen gravel dust before, as CFB Rivers was only a few miles from a gravel pit. And what had happened to the blistered paint?

But notice what they did test for: radiation and magnetism. Why? What protocols would have dictated such tests?

The answer might have something to do with both the Falcon Lake UFO case, which had taken place earlier that year. At the Falcon Lake site in Eastern Manitoba, higher-than-normal levels of radioactivity had indeed been detected at the site, so there was a precedent for expecting radiation. This also was the reference to the "white blood cell count," which was reportedly abnormal in the blood of the Falcon Lake UFO witness. But why check for a change in the magnetic field? Civilian UFO investigators had been claiming that such effects were common in cases where UFOs were said to have approached cars, but would this have necessarily been translated into operating protocol for military UFO investigations?

There is no record of Hebert being examined by the base physician. And isn't it odd that Hebert's companion, Miss Ross, was not similarly tested?

Regardless, Bissky and his team decided that the case was nothing more than a falling "meteorite" (NB - "meteor"). Ed Leith was a geologist at the University of Manitoba whose expertise included meteoritics, and he was the National Research Council of Canada representative in Winnipeg. Leith was known to be a skeptic and debunker of UFOs as well.

The meteor explanation is viable for the observations of the fireballs with tails passing from SW to the NE. The 30-second duration of the light above the car isn't compatible with meteors or bolides, although UFO witnesses' perception of duration has been suggested to be often in error. But Ross said the light seemed to have been stationary, too. It would have been useful to get more testimony from her as well, since her observation was somewhat different from that of her companion.

There was no evidence to suggest that the TCHQ UFO investigation team conducted anything more than a cursory investigation of the case. In fact, a memo dated "30 Aug" from Robertson to DSC Mr. Greenwood (a civilian?) noted:

The paragraph in question seems to have been about Hebert's car and the dust that was found and then not found.

So according to this memo, the TCHQ UFO investigation team chose to "on their own initiative," conduct a less than thorough investigation of the incident. They didn't interview witnesses in detail, didn't arrange testing of any samples from the car and didn't try to establish a definitive timeline of events.

Despite this, a handwritten summary of their conclusions was sent to Ottawa by E.W. Greenwood, DSC/DCOps. The document, dated 4 September 1967, read:

1. Reference UFO Report Rivers, Man.
2. The actual sighting reports conform with the appearance of a fireball, and the two observations of "explosion" noises not only fit the fireball pattern, but suggest a good probability that some of the incoming material would reach the ground!
3. The only important confusion is the reported time - 5:30 to 7:10 AM. If the times are reliable, we have another coincident meteor or UFOs. Quite possibly the times are guesses - this might be checked.
4. Prof Leith can take up the fireball investigation. 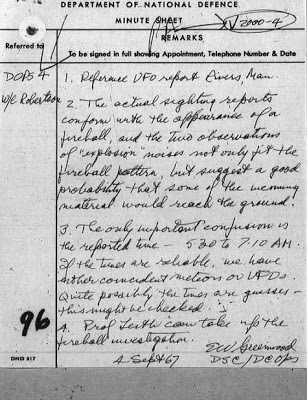 According to this, the final document in the case file, the incident was solved as a fireball/bolide event, even though the observations did not completely fit the explanation. Robertson even acknowledges that the time differences might suggest that two objects were involved. Were there two brilliant meteors an hour apart? One fireball and something else? And was Hebert's estimate of duration of the event radically in error? And what, exactly, did he see? A brilliant, slow-moving object, or simply a bright flash that he assumed lingered because of a sudden shift in night vision adaptation?

And, if the meteor explanation was valid, what of the "explosion" that rattled windows? It is rare for witnesses to hear the sonic booms of fireballs, as most are high in the atmosphere, even those that explode or fragment. But meteor sounds have been acknowledged as real, electrophonic phenomena, though the theory of their production is "controversial." (See: http://www.pibburns.com/catastro/metsound.htm) Whether or not Leith investigated or tried to locate pieces of the meteorite through a ground search is not known.

Finally, a note about "disclosure." The official documents from the National Archives regarding the Canadian Forces UFO file on this case are available online through the relatively recent "release" of scanned documents now available online through the Canadian government. Some have said that the sudden availability of these files is an indication of worldwide government disclosure of UFO documents. The reality is that I had these documents already in my possession more than 30 years ago, when I simply requested a microfilm copy of the National Research Council files through my own local library, then painstakingly (and expensively) microcopied the relevant pages as hard copy printouts. They are faded now and hard to read, but they are the same documents.

The Rivers, Manitoba, case of August 28, 1967, gives some insight into how UFO reports were investigated by the Canadian military. It is especially noteworthy because it involves multiple witness, military witnesses, and alleged physical and physiological effects. It remains a curious case, although evidence suggests that at least some witnesses' observations were those of a bright, fragmenting fireball. It is too bad that it wasn't more thoroughly investigated.

Comments:
I was 7 years old and living on the base when I rcall my dad, who was an Aircraft Maintenance Engineer on the base, telling our family about his observation of the vehicle. If my memory serves me right, he talked about evidence of extreme heat, even affecting/melting the glass, nothing he had seen before. Anyway... my older siblings and mother may remember more.

I was 7 years old and living on the base when I rcall my dad, who was an Aircraft Maintenance Engineer on the base, telling our family about his observation of the vehicle. If my memory serves me right, he talked about evidence of extreme heat, even affecting/melting the glass, nothing he had seen before. Anyway... my older siblings and mother may remember more.