Headlines on #ufotwitter and some news outlets absolutely gushed with the news that Vice reporter and CTV journalist Daniel Otis had received 290 documents from the Canadian government as a result of his Access to Information (ATI) request (Canada's version of the American FOIA).

Otis has been doing a phenomenal job of filing requests and is the Canadian version of John Greenewald, spending hundreds of dollars and man-hours seeking UFO docs from the Canadian government. His success at obtaining previously-unreleased records about UFO sightings in Canada has been pretty darned good.

[Aside: in Canada, they are indeed called UFO, not UAP, despite what most people would like to think. Transport Canada has a category clearly labeled UFO, and report forms used by the Canadian Department of National Defence read "UFO Report" at the top of the page.]

Otis and I have been corresponding for a while now, ever since he started his interest in UFOs in 2020 and his first Vice articles appeared. He is also in contact with other ufologists and UFO fans, as well as individuals within media and government. He is well-situated to dig into matters relating to UFO phenomena.

He was able to get some very interesting documents and statements from spokespersons for National Defence as well as Transport Canada, obtaining details on how UFO reports are dealt with and collected in Canada. (And, incidentally, I am mentioned often in his Vice article, once even calling me "Canada's Point Man" for UFOs.)

His latest Vice article was very curious, because when he told me it was coming out and that he had hundreds of UFO docs from the government, I was puzzled. He had told me that I was mentioned in some of the documents, which made sense, because I have been receiving UFO reports from DND and other government sources since the year 2000. I have several hundred on file since that time, so the number 290 seemed strange. It should either be much greater or much smaller.

Otis made the entire set of documents he received available on the Vice website, much to the delight of UFO fans, many of whom heralded this as Disclosure. It's admirable that he made them all available for scrutiny.

But Disclosure, it ain't.

I took a hard look at the set of docs, and found an interesting breakdown. Out of 290 pages of documents, there were reports on 116 incidents. Many had more than one page, leading to the inflated number. Also, the last 30 pages of the set of documents was a list of about 500 Civil Aviation Daily Occurrence Reports (CADORS) compiled by Transport Canada and Nav Canada (the Canadian versions of the American FAA).

CADORS include everything from blown tires in landing to drunken passengers on flights, to errors in communication between pilots and air traffic controllers. There are between 50 to 100 such incidents reported each day in Canada. A small number are categorized as: Weather balloon, meteor, rocket, CIRVIS/UFO." These were what comprised the 500ish cases in the list. And yes, most were the first three in the description.

But within that list are indeed some strange reports of pilot sightings of UFOs that don't seem to have simple explanations. I have been including these reports every year in the annual Canadian UFO Survey, which analyses national UFO case data. And more recently, as new ones have been reported, I have been posting them to Facebook, and other social networks such as #ufotwitter, along with Otis and others who find the incidents in the daily lists of Transport Canada CADORS.

So the first red flag is that the incidents in this list had already been made public in a number of ways dating back to the year 2000.

The other 116 reports? Of those, all except 13 were the actual CADORS reports. They were already in the list of CADORS later in the set of documents.

Also, the earliest of these was from 2009, so the reports covered only about a dozen years, not 20 years. The 13 reports were military files, such as Communications Instructions for Reporting Vital Intelligence Sightings (CIRVIS), a category that dates back to JANAP 146, a policy created in 1953 directing both Canadian and American pilots to report all "unidentified flying objects." I had already made the existence of most of these public, even at some UFO conferences and public presentations, on slides.

Finally, it has to be noted that, like all collections of UFO reports, the vast majority have probable explanations, and don't contain any proof that UFOs are alien spacecraft (as a significant number of UFO fans believe).

With this examination of the 290 documents, it is obvious this wasn't Disclosure (or even disclosure).

It was definitely interesting, however, because Otis' ATI request for UFO documents generated this set of files that were indeed categorized as UFOs by the Canadian government. Furthermore, many of these were reports of observations by pilots or air traffic controllers (or radar operators), who can be considered pretty good observers. (There were also quite a few reports from citizens who reported UFOs to airports; I have described how the average person can report UFOs to Transport Canada in a recent blog.)

The reaction from hardcore UFO cans and zealots was fairly predictable, however. "Why hasn't the mainstream media reported on this?" "Why didn't this get more attention from anyone?"

The reason is, of course, because the "release" of the 290 documents wasn't a release, but a response to a specific ATI request, so it wasn't disclosure of anything. Plus, the reports released don't show anything other than objects were seen by pilots and non-pilots, and most of these objects had explanations. Further, even the truly unidentified ones don't explicitly implicate aliens - or even a foreign power operating over North America.

That's not to say that some cases weren't curious.

A concerned citizen reported a black object the size and shape of a rugby ball moved quickly west to east above their house, less than 100 feet above the ground. Area control centre (ACC) Shift Manager was advised.

There was even an update on file:

Both the CADORS and the CIRVIS report were provided to Otis, one of the few instances where that was so.

At approximately 2100Z, a Piper PA-23-250 on a local flight from Burlington, ON (CZBA) was outbound (north eastbound) on the simulated LOC 30 approach at three thousand feet. When crossing the Binbrook non-directional beacon (NDB) (5.7 nm from CYHM airport), the pilot reported seeing an object pass under them at approximately 2,900 ft westbound, jelly bean shaped, green in colour and about 3 feet in diameter. The pilot stated that it was not a balloon and that if it were a balloon it would have been going in the same direction as [the plane] as the wind direction was 300 at 15 knots. The object was going in the opposite direction to the wind.

I guess that Tic-Tacs can be green as well as black or white. (Although three feet in size is much smaller than the one that buzzed the jets in California.)

Otis has been posting many of these CADORS cases and associated documents on social media for more than a year, and UFO fans have been digging them.

I've been posting about Canadian government UFO docs (and posting the docs themselves) for decades. I even have showed slides of them to audiences at some UFO conventions and other public meetings, as noted above. 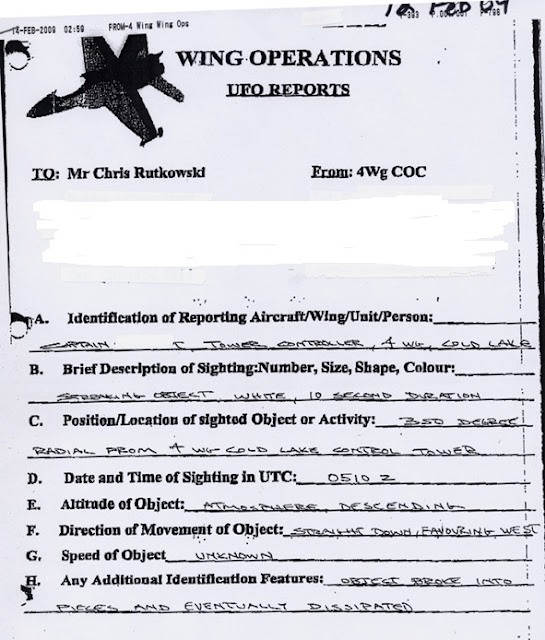 Or this one, seen and reported by an experienced meteorologist in Canada's Far North, also in 2009: 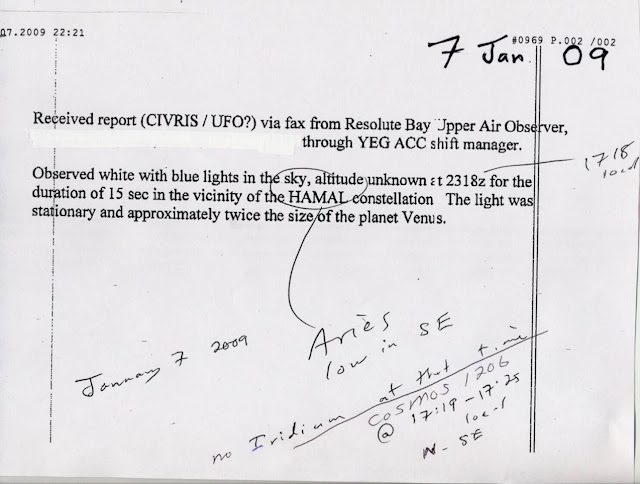 The fact is that there is considerable documentation that the Canadian government has information on unidentified flying objects seen by pilots and other good observers.

Daniel Otis has done good work in making this known to adherents of ufology.

I am keen to talk to anyone who knows anything at all, however small, about Project Xaloc, which was a secret military research program in the 1950s and 60s.