Tic Tac seen at close range in Yukon in 2003

The witness was driving toward Whitehorse on the Alaska Highway just north-west of MacRae Subdivision when she spotted an object on Haeckel Hill. It was just left of the windmills and just below the top of the ridge (about 11 km distance) and moving south, down the hill toward Copper Ridge Subdivision very fast. The witness had her mother as a passenger, but she did not say anything to her about the object as she did not know what it was. Her mother did not see it. The object was cigar-shaped, no wings or markings, and looked like the body of an aluminum airplane. 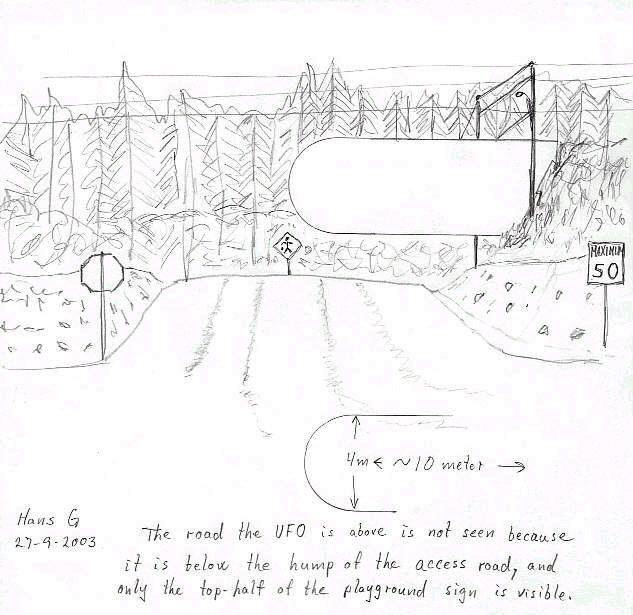 The witness was wondering what that object was doing, flying low down Haeckel Hill toward the subdivision, knowing that the airport wasn't there. At the bottom of the hill it looked like the object was skimming the top of the trees but when the highway turned left, she lost sight of it behind the trees on the right. The duration of this first part of the sighting was about 20 seconds. The object had been coming toward her direction, so she kept on looking sideways as she was driving.

Almost 1 km further on was a short road (100 m) on the left side of the highway going into Canyon Creek Subdivision. As she passed the road, the UFO came from the opposite side at the end of the road, going south. She did not see the whole craft but figured that about 10 meters of the front was visible in the 1 to 2 seconds it took to drive by. It was moving fast just above the road and the trees were visible above the UFO. The surface of the UFO was like brushed aluminum, no portholes or doors were visible, and the front of the UFO was perfectly round. By the time she had passed the road, the front (nose) of the UFO was half way across the road at the other end. Being inside a vehicle herself, she doesn't know if there was any sound from the UFO.

At the time of the sighting, the witness had no unusual feelings, but said that after driving another kilometer she realized that this was a bit scary being so close to a UFO. After bringing her mother home, she went back to Canyon Creek to see how this craft could maneuver across the road. She called our UFO hotline the next morning, and we went out to Canyon Creek that afternoon to investigate the site. There was a road going parallel to the Highway, which the UFO was following. Right at the intersection where she saw the craft, there were two hydro-poles, one on each side of the road which the craft had to fly between, and there was a heavy steel guy wire about 7 meters up between the poles it had to get under. It was estimated by her description that the craft was cigar-shaped (round at the ends and in circumference) flying about 2 meters above the road surface. The body itself was about 4 meters high, which would leave about 1 meter between the top of the craft and the guy wire. Not seeing the whole craft, we don't know how long it was. From seeing the UFO on Haeckel Hill to meeting it at Canyon Creek it took about 1 minute. Assuming it was the same object, one can calculate the velocity. In one minute it traveled 10 kilometers which is about 600 km/h. (Allow + or - 15% for all the measurements).