"I stumbled across something I wasn't supposed to see"


One of the most remarkable UFO cases on record is the Val Johnson incident of August 27, 1979. That morning, Deputy Sheriff Val Johnson was on patrol in Marshall County, Minnesota, when his police car was apparently struck by a UFO. What makes the case extraordinary is that the "accident" was immediately investigated by the Marshall County police force and treated as a standard police report. What's more, the police car, as evidence of the incident, was never repaired and was impounded. It has been preserved and is still on public display today in a museum. 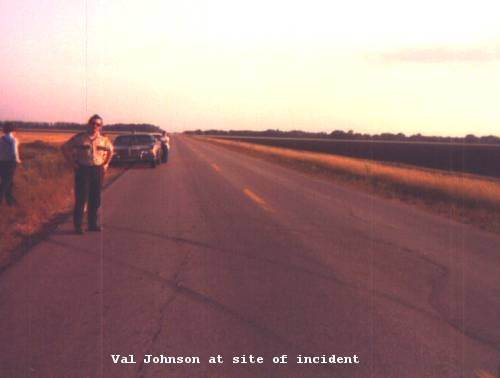 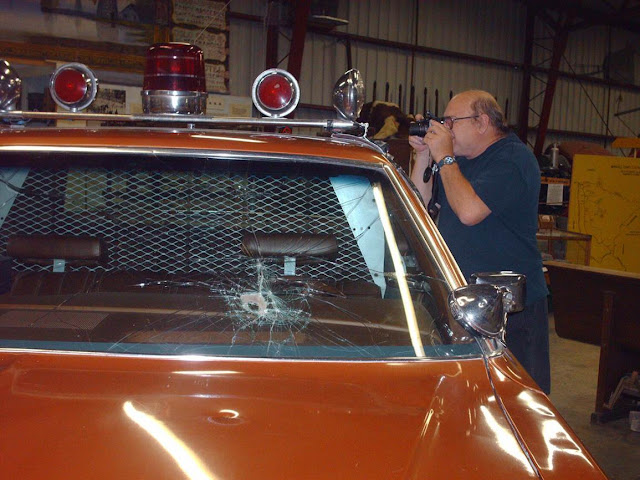 In the April 1980 issue of the Swamp Gas Journal, I noted:


A main issue under examination at the Manitoba Conference on Ufology on March 16, 1980, was the Val Johnson UFO incident which occurred on August 27, 1979. The case received wide publicity and has been noted in most ufozines (it was noted in SGJ #6), so it will not be repeated again here. Briefly, it involved the apparent impact of a US police vehicle with an unidentified flying object, near the town of Stephen, Minnesota, The incident was supported by various physical evidence in the form of dents, impact marks and broken glass.

Frankly, it is one of the most puzzling incidents in the history of ufology. This strong statement is partly because of the fact that the case involves a man who has been described as "the perfect witness." Val Johnson is a Deputy Sheriff in Marshall County, Minnesota, and is a trained observer as well as an experienced police officer. The physical evidence suggests that something very strange happened to him in the early morning on a lonely stretch of road near the Red River. The time sequence of events is very firmly established by both tape recorded and written logs of his actions that morning. The physical traces were examined and measurements were made immediately after the encounter by trained police investigators, and Johnson was taken to a hospital by ambulance directly from the site.

At MCU, the case was discussed and reviewed in detail by all participants, as presented by guests Val Johnson, Everett Doolittle and Greg Winskowski. Doolittle was the first individual to reach the site after Johnson radioed for help, and Winskowski conducted the initial police investigation. 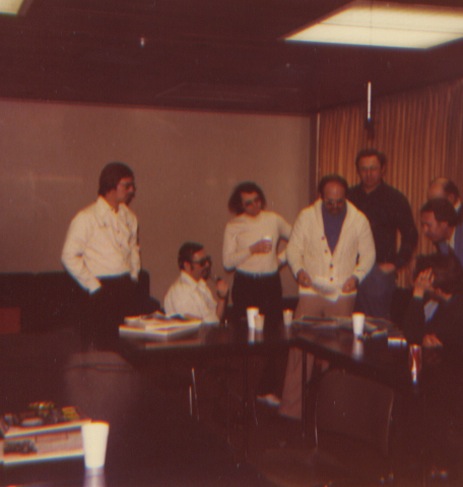 Invited attendees with Val Johnson and other deputies in discussion at the first Manitoba Conference on Ufology.


Members of Ufology Research, including Guy Westcott and Chris Rutkowski, were among the first civilian investigators of Val Johnson's experience, since at that time there were few UFO investigators in the area and Winnipeg is only about two hours driving time away. This was a unique cross-border collaborative effort.

I wrote about this case several times, and summarized the conference proceedings in the special issue of the Swamp Gas Journal, later republished. Anticipating some interest in the discussion, I had used a small cassette tape recorder to capture some of the discussion. However, the tape recording had been thought lost during the intervening decades.

Amazingly, the tape surfaced only a few days ago, serendipitously just prior to the 40th anniversary of the incident. I managed to convert the fragile magnetic tape to a digital version, and we now have a playable record of about half an hour of the conversation with Val Johnson and a select few conference attendees.

Towards the end of the recording, Val Johnson is asked about what he saw, he replied: "I think I stumbled across something I wasn't supposed to see."

He refused to speculate about the UFO he encountered being an alien spacecraft.

Jack Webb would have liked him: "Just the facts, ma'am."