What did President Trump say about UFOs, really?


ABC has released the full transcript of what President Trump said about UFOs in an interview with George Stephanopoulos, which aired during  a special edition of 20/20, titled: "President Trump - 30 Hours," on Sunday, June 16, 2019.

It was at an interesting time during the long, wide-ranging interview. Stephanopoulos didn't go easy on his subject, disagreeing with him, prodding him, and not simply giving him platitudes, At one point, they bickered about polling numbers, and they touched on the possibility of a "conspiracy" about polls and a "suppression" 'of the truth about Trump's popularity. He noted that the culprits were "bad people" who espoused "fake news."

And this is where the subject of UFOs was brought up. 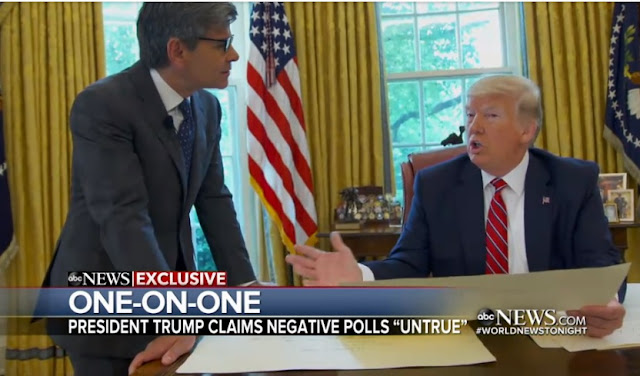 STEPHANOPOULOS: You and I, we know we disagree about that, but we have a whole day ahead to go on this. Before we go, one of the things you have as president is access to all the information all the mysteries out there I was just struck in the last couple weeks, we’re reading more and more reports of navy pilots seeing lots and lots of UFOs. Have you been briefed on that?
TRUMP: Yeah, I have-- I have.
STEPHANOPOULOS: What do you make of it?
TRUMP: I think it’s probably, uh, I want them to think whatever they think, they do say, I mean, I’ve seen and I’ve read and I’ve heard, and I did have one very brief meeting on it. But people are saying they’re seeing UFO’s, do I believe it? Not particularly.
STEPHANOPOULOS: Do you think you’d know if there were evidence of extraterrestrials?
TRUMP: Well, I think my great pilots-- our great pilots would know. And some of them really see things that are a little bit different than in the past, so we’re going to see, but we’ll watch it. You’ll be the first to know.
STEPHANOPOULOS: Mr. President, thank you. Have a good day.
Of course, UFO buffs have pointed to this exchange as proof that Trump is part of the conspiracy to hide the Truth about UFOs, and that this is somehow proof of Disclosure.

If you look at what he actually said, however, and put it into context with an understanding of the way he speaks about other things, and where he gets his information, this brief interview segment tells us very, very little.

He admitted: "I've seen and I've read and I've heard...", which simply means he watched the news segments about UFOs on Fox News, which is where pany pundits believe he gets much of his information. So he likely just repeated what pop ufology has claimed about the Navy pilots' UFO sightings.

Did he have a "very brief meeting on it"?

Unlikely, as we understand what a "meeting" could look like in this case. He very probably just exchanged a few words with someone who had been watching the Fox TV News segment.

The rest of Trump's comments on UFOs are as difficult to decipher as anything else covered in the interview.

One UFO buff excited told me in a message; "But a sitting American President admitted he was briefed on UFOs!"

So did Obama, and the subject of UFOs was raised with him several times while in office,

Is this exchange "something?"