The passing of Michael Persinger


The news of the passing of Michael Persinger has renewed interest in his UFO-related theories about electromagnetism and its effects on the human brain.

I am sad to learn of his passing, and even though we disagreed on his Tectonic Strain Theory (TST) of UFOs, there is no question that he was instrumental in advancing UFOs into scientific discourse. His dozens of scientific papers published in peer-reviewed journals are proof that the subject of UFOs can be discussed in a scientific forum.

His book Space-Time Transients and Unusual Events, written with his partner Ghislaine Lafrenière, was a breakthrough work on the relationship between disparate Fortean phenomena and physiological effects. 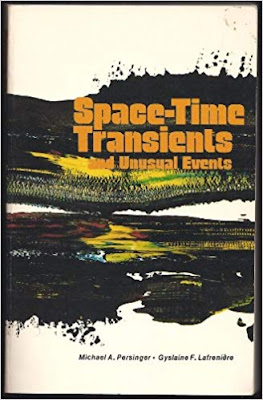 But he was quite wrong.

This isn't just an offhand opinion. I spent many months researching and studying Persinger's work, going through data and testing his theory. I even published a thesis on the TST, quantifying the energy requirements that would allow seismic strain to release energy viewable as UFOs. (The complete thesis, including its tables, charts, and formulae, is no longer online.)

I spoke with Persinger's own actual PhD thesis advisor, who walked me through his research on the effects of magnetic fields upon the brains of mice. When I showed him the many articles Persinger was publishing about the TST and resultant UFOs, ghosts, religious experiences, and even increased rates of cancer, he was appalled.

Persinger's advisor encouraged me to publish a critical article in the same scientific journal, describing my concerns and analyses. I did, and the result was a series of articles debating the nature of UFOs, all published in scientific literature, almost completely unnoticed by ufology.

Basically, Persinger believed that tectonic strain deep within the Earth could generate electromagnetic fields, and these fields could move around underground but occasionally reach the surface where energy could be released and cause tangible effects. Sometimes, the energy would be visible as UFOs (orbs, dancing lights, plasmas, or earthquake lights), and sometimes, the EM fields would affect human brains to make people believe they had seen UFOs. And not just UFOs, but aliens, disembodied voices, ghosts, encounters with God, and paranormal phenomena. And yes, even apparent UFO abductions.

Essentially, all Forteana could be explained by tectonic strain.

Now, there are some scientific studies that show human brains can indeed be affected by EM fields and energy. And in the physical environment, anecdotally, it is assumed that magnetism can give rise to light phenomena such as orbs and spook lights. The renewed interest in "magnetic anomalies" as presented at some UFO conference is evidence of this. I also researched Hessdalen in detail, as well as other famous spooklights, like Brown Mountain, Taber, and others.

But with a background in physics, while I was most interested in seeing a scientific explanation for UFOs, the energy requirements to produce the effects as laid out by the TST didn't seem reasonable. So, I deepened my research, and my calculations showed there were some serious problems in the energy requirements.

But that's not what really worried me.

It was discovering a published article by Persinger that used my own UFO report data to show a correlation between UFOs and earthquakes. And I knew immediately that Persinger's theory was nonsense.

Persinger (and his co-author John Derr) stated explicitly that "most well-documented [UFOs] refer to actual geophysical phenomena that are generated by tectonic strain." He used my data as published in the Manitoba UFO Catalogue for UFO reports from 1974 to 1977, mostly in the area around Carman, Manitoba, Canada. (This was the infamous "UFO wave" of "Charlie Red Star" UFO sightings currently expounded in some UFO forums.)

Persinger demonstrated that the increase in UFO numbers during the Carman flap was correlated with a moderate earthquake almost 500 kilometres away in southern Minnesota, but which occurred weeks after the UFOs were reported. Persinger concluded that there was a "temporal displacement" combined with a "geographical displacement" that made the correlation valid. In other words, any UFO reported in Carman was connected with an earthquake hundreds of kilometres away and several weeks before or after the UFO sighting. In fact, Persinger used earthquake data from as far away as 1250 kilometres in order to get a good fit for his results. That was like saying a small UFO orb witnessed in Chicago could be explained by a slight tremor near Detroit a month earlier.

Which, of course, was fudging the data.

That being said, the data itself was a problem. I should know, because it was my data, and I knew its limitations.

The Manitoba UFO Catalogue (MANUFOCAT, patterned after UFOCAT), included raw UFO report data, including both explained and unexplained UFO cases. In fact, it was mostly explained cases. (Yes, even most of the "Charlie Red Star" UFO reports could be explained.)

So how could misidentifed airplanes, stars, meteors, and satellites be correlated to mostly weak, distant earthquakes in an entirely different country? They couldn't. And Manitoba is seismically inactive, so there was little chance regional seismic effects could manifest as UFOs.

And back to the energy problem. While tremendous amounts of energy are released during major earthquakes, pressure among tectonic plates deep underground (tens of kilometres or miles beneath the Earth) does build up and release every day. Persinger was correct in suggesting that EM fields and energy within the Earth could move about, and he used this basis to explain how such energy could manifest a a UFO in Carman one day, then travel back underground to where an actual seismic event could occur very far away and months later. And the energy requirements to have such energy bursts leap out of the ground and fly over grassy meadows for several minutes would be very significant.

But then, why aren't there more UFOs seen around seismically active areas? Physics says that the path of least resistance is the one preferred, and if there's enough energy to create a UFO or affect someone's brain, then the seismic energy should be released nearby, too. Plus, why only one or two witnesses (on average), when a large EM field can extend for miles?

Anyway, Persinger responded to my criticism in print, too. The debate raged for a while, and we tacitly agreed to disagree.

I wasn't the only one to find the TST lacking, though. (A debunker, too.) But undaunted, Persinger continued to publish dozens of papers on the subject, ignoring his critics.

For example, getting too near to a UFO can kill you.

Or is it simply that UFOs cause cancer or can make UFO witnesses depressed.

And, even UFOs and other phenomena in areas near Skinwalker Ranch can be explained by seismic effects, much to the likely chagrin of fans of the current interest in the area, including Bigelow properties.

Persinger later developed the so-called "God helmet," which created an EM field that caused those wearing it to have out-of-body-experiences, sense ghostly apparitions, and hear voices.

(Except it didn't work all the time, either. Many people using it only reported feeling a bit disoriented. But no ghosts, aliens, or deities. And when a science journalist tested the device, it didn't really work at all, and it was his opinion that only people who were greatly suggestible would experience the faux paranormal effects.)

So, while I am saddened to hear of his passing, I recognize that the legacy of Michael Persinger is very mixed. He advanced a theory to explain UFOs without invoking the extraterrestrial hypothesis, but instead replaced it with a scientific-sounding concept that used inadequate methodology and data.

But he will remain known as a scientist who made a significant contribution to ufology.