If you’re looking for something a bit different for your vacation this summer―and someone in your family is really into UFOs―you should consider visiting places in Canada that some believe attract otherworldly tourists, too.

Bored with the usual touristy venues? Tired of packed, noisy beaches and stifling amusement parks? From places to hang out and watch for mysterious lights to horseback trail rides to where a UFO was seen to land, these are some of Canada's best must-see places to visit by anyone keen on aliens and UFOs. 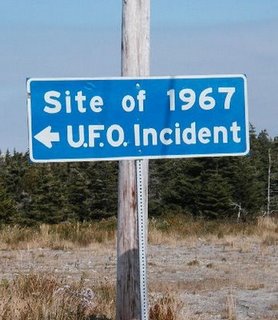 Shag Harbour UFO Crash Site
Shag Harbour, Nova Scotia
http://www.ufocasebook.com/Shagharbor.html
http://www.novascotia.com/events/festivals-and-events/shag-harbour-ufo-festival/-1159
In October 1967, many witnesses, including RCMP, saw a bright object fall into the ocean off the coast of Nova Scotia. The case, often called “Canada’s Roswell,” is supported by actual government and military documents from the National Archives that detail the official investigation and efforts to recover whatever it might have been. Local residents even commemorate the incident with an annual UFO Festival. There’s even a sign along the highway near where what happened.

A new sign has recently been put up near the site: 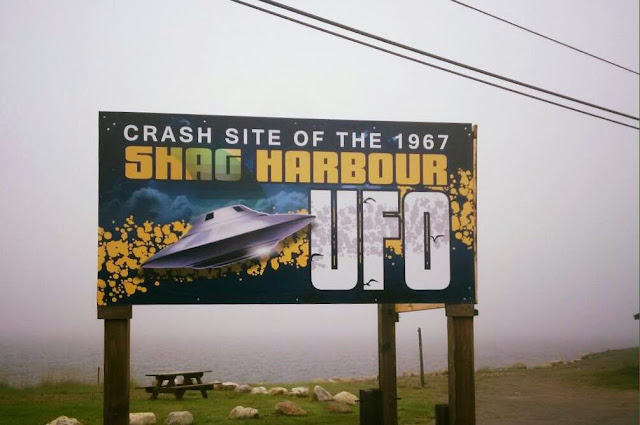 Scugog Island Ghost Light
Near Port Perry, Ontario
http://www.scugogheritage.com/misc/ghostroad.htm
Whether a mysterious light is called a UFO or a ghost is a matter of perspective and the opinion of whomever is seeing it. Recurring mystery lights are often called spook lights or ghost lights. Most have background stories about unfortunate individuals’ tragic deaths (sometimes decapitations) that result in their ghosts haunting where accidents occurred. Witnesses say that the lights appear in the distance then somehow zoom towards them, only to vanish suddenly. This light northeast of Toronto has a long history, and even has been investigated by Toronto ghosthunters. (It’s actually on a peninsula, not an island.) With a classic tragic origin story, one writer noted: “the 'ghostlight' appears as one solid light with the naked eye as well as through optical devices such as telescopes, binoculars, etc. Occasionally it appears as if more than one light is merging together to result in a larger light that pulses.” 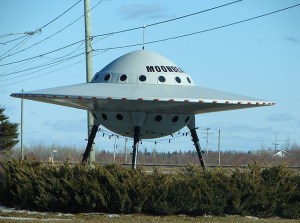 Moonbeam, Ontario
120 kilometres north of Timmins, along Highway 11, and about 20 kilometres east of Kapuskasing.
The town of Moonbeam got its name from stories by pioneers who saw flashing lights falling from the sky, which they called “moonbeams.” The town has embraced its spatial origin, even erecting a huge flying saucer along the highway as a tourist attraction. About 10 years ago, development of nearby hiking trails included signage with green-skinned aliens guiding the way.
http://www.canadacool.com/location/moonbeam-ontario/

Neebing Spooklight
40 kilometres south of Thunder Bay, Ontario, on Highway 61
http://www.pararesearchers.org/index.php?/20090428650/Ghosts-Hauntings/Neebing-Spooklights.html
Several locations near Thunder Bay have spook light stories. These are more like UFO sightings in the sense there are no tragic deaths or events associated with them, but are more simply lights that seem to appear and disappear while flitting about treetops. Some witnesses describe them as UFOs rather than ghosts. 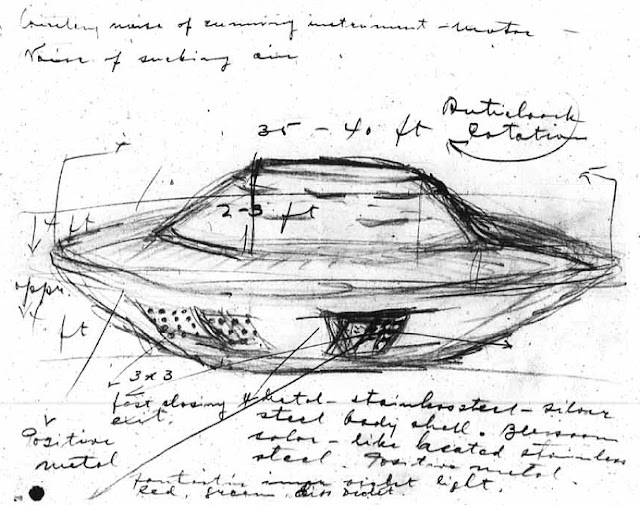 Falcon Lake UFO Incident
Falcon Lake, Manitoba
http://www.ufoevidence.org/cases/case376.htm
http://falconbeachranch.com/horseback-rides/
In May 1967, Stefan Michalak was doing some amateur prospecting north of Falcon Lake in Whiteshell Provincial Park. He encountered a flying saucer which seemed to land on a rock outcropping near him. He walked up to it and was burned by its exhaust when it took off. The case was investigated by the RCMP, Canadian Forces and even the United States Air Force, which considered it “Unexplained.” Today, you can get a t-shirt commemorating the event in Falcon Lake, and the local riding stable offers guided “UFO Rides” to the site where it occurred. 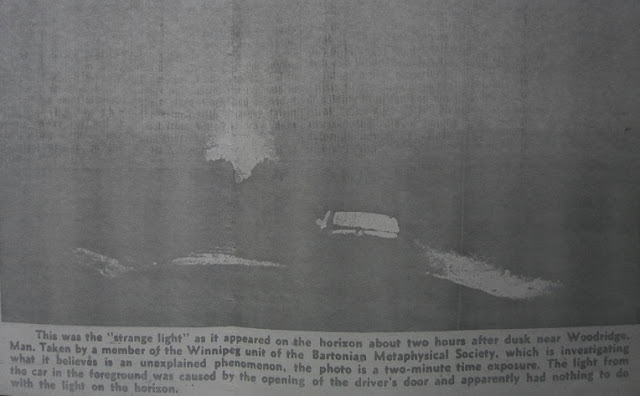 Woodridge Spooklight
Woodridge, Manitoba
http://mytoba.ca/voices/the-ghost-lights-of-woodridge/
http://uforum.blogspot.ca/2012/10/a-halloween-ufo-case-woodridge-spook.html
This spooklight also has an origin story involving a decapitation. The light is said to be a lantern carried by a headless ghost looking for its missing head along the railroad tracks south of town.
The light has been investigated by researchers, even some from the University of Toronto.


St. Louis Spook Light
30 kilometres south of Prince Albert, Saskatchewan.
http://www.cbc.ca/news/canada/saskatchewan/7-spooky-saskatchewan-stories-1.1163886
http://www.philcampagna.com/stlouisghostlight/ghost.html
The light appears near the old railroad tracks about eight kilometres north of St. Louis. The gravel road that leads to the location is unmarked and hard to find. Best bet: Go to St. Louis, and ask someone. According to the CBC: “…one night in the 1920s, a CNR engineer was checking the tracks near St. Louis, Sask., when he was hit by a train ... and decapitated. Since then, there have been numerous sightings of a mysterious light which some claim comes from a phantom train or lantern.” 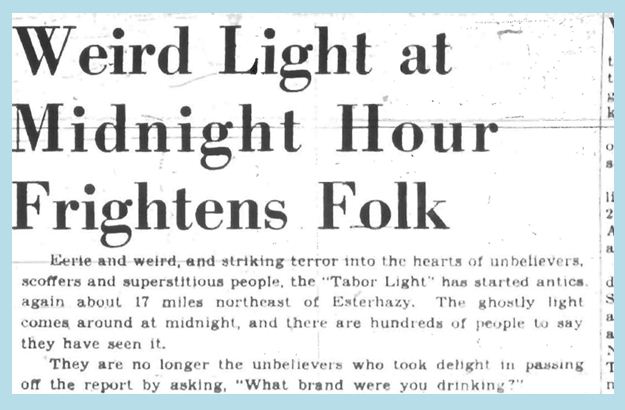 Tabor Light
17 miles NE of Esterhazy, SK
http://www.abovetopsecret.com/forum/thread822599/pg1
http://www.canada.com/reginaleaderpost/news/city_province/story.html?id=a68c93b0-21ba-488f-b7db-f0952cda0452
https://www.geocaching.com/geocache/GC3HW55_tabor-light?guid=d64b1764-5a6d-48c2-87df-00d603ce43f8
The spooklight with probably the richest history is that of the Tabor Light in Saskatchewan. It is more of a true “ghost light,” as it appears usually near the Tabor Cemetery, near the village of Yarbo (Tabor is completely gone today.). There’s even a geocache that directs you there, if you can find it. In the 1930s, dozens of people attested to seeing a light hovering over the tombstones and adjacent field. 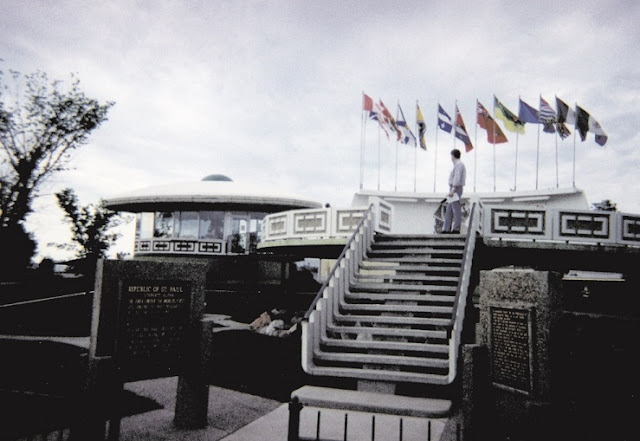 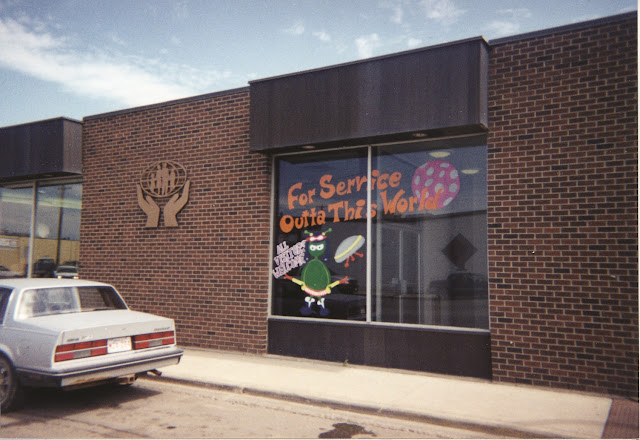 St. Paul UFO Landing Pad
St. Paul, Alberta
http://www.town.stpaul.ab.ca/UFO-Landing-Pad
“The World’s First UFO Landing Pad” was built in 1967 as a Canadian Centennial Project. In the 1990s, the saucer-shaped platform had fallen into disrepair (from apparent lack of use) and was restored, with a UFO museum added as well. A UFO conference was held there a few times, and there are plans for a 50th anniversary celebration in 2017. Queen Elizabeth visited the pad in 1978, and Mother Theresa herself visited it in 1982. 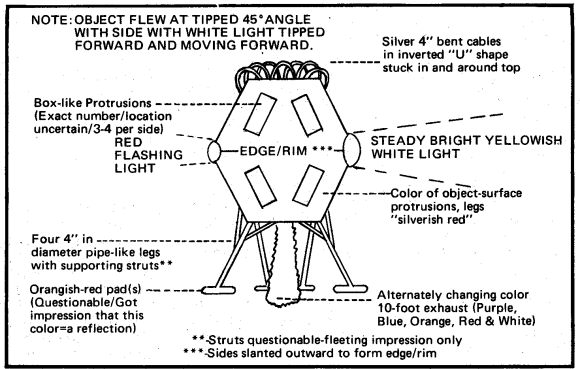 Keats Island “Nest of UFOs”
Keats Island, BC
http://ufobc.com/History/1960/nestofufos_v2.htm
A cross between a recurring spooklight and a repetitive series of UFO sightings, Keats Island is northwest of Vancouver across the bay from Gibsons. In 1967, there were so many strange UFO sightings reported there, the island was considered a “UFO nest.”