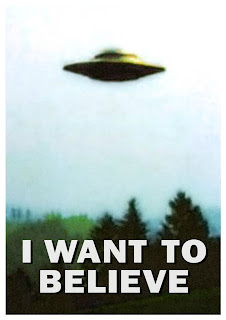 Ten Things Related to the X-Files That We “Know” About UFOs
By Chris Rutkowski, Ufology Research

Although the X-Files TV show went off the air in 2002, interest in the series has continued unabated. There have been books, a spin-off TV series and several graphic novels. A “tenth season” done as a comic book continued the series until 2015, and “season 11” has just started. But the X-Files fanbase was part of the reason that helped encourage the miniseries revival that will air beginning January 24, 2016.

The X-Files followed the exploits of “believer” Fox Mulder and “skeptic” Dana Scully as they investigated otherworldly events (not all of them related to aliens) and battled a secret group trying to prevent their discovering “the truth.” The X-Files partially drew on case reports of tens of thousands of UFO sightings worldwide and the widespread belief that aliens are visiting Earth, abducting humans and working in secret with government agencies desperate to cover-up the “truth.” Among the memes and themes recurring often in the series are the following:

Lone Gunmen
While we obviously don’t know whether such a group really exists, there are small groups of people devoted to investigating weird events that may be related to UFOs and aliens in an attempt to get at “the truth.” Whether they are as geeky as portrayed on TV is a matter of opinion. One notable enclave is the private “Roswell Slides” group on Facebook, whose members are a diverse collection of tech-savvy fans who vet sensational claims about UFOs posted on the Internet. They used sophisticated digital enhancement and historical research to show that slides of a much-hyped “alien body” allegedly found 50 years ago and presented to the world in 2015 were actually that of a mummy on display in a museum. Other groups of UFO geeks certainly exist.

“Real” X-Files
The TV show portrays FBI agents who travel around the world investigating UFO-related incidents. While no such agents likely exist (or existed), there are more than 1,600 FBI files related to UFOs that have been discovered through FOIA requests in the USA. More probably exist at higher levels of classification. At one time, the US Air Force had an office for investigating UFO reports, with the belief that some cases might be security concerns or even attempts by Russians to infiltrate American airspace. This became Project Blue Book, which was portrayed as a highly-efficient task force on a network TV show in the 1970s. Thousands of files from Blue Book have been declassified and examined by UFO researchers. A parallel group, called Project Second Storey, was created in Canada and existed for a few years in the 1960s and early 1970s. Blue Book was officially closed in 1970, and since then, there has been no official investigation of UFOs by military or government agencies. But does a UFO investigation team exist today? Some UFO true believers insist that the American government has in its possession proof that aliens are visiting earth, and that a major cover-up exists, perpetrated by politicians and high-ranking officials including the President of the United States. Some have even petitioned the government to announce Disclosure, finally telling the public the “truth.” Sadly, no good evidence of such a cover-up exists, despite the proclamations and claims of the Disclosure Movement.

UFO Reports
It’s a fact that people report seeing UFOs. What’s in dispute is whether these are explainable in terms of misidentifications, hoaxes and natural phenomena, or represent alien visitation. Polls have shown that about 10% of North Americans believe they have seen UFOs, but only about 10% of that number actually reported their sightings to official agencies or investigators with UFO groups. The Canadian UFO Survey has found that about 1,000 UFO sightings are reported in Canada every year. Most have simple explanations or insufficient information for evaluation, but a small number of cases each year do not have easy explanations as planes, satellites, stars or planets. There is no incontrovertible evidence that these “Unknowns” are indications of alien visitation.

The Syndicate
One of the major themes of the X-Files TV series is that of a clandestine organization comprised of powerful business executives and bureaucrats who actually control the government and military, and keep the presence of aliens on Earth secret. This Syndicate is working with aliens as they seek to “re-colonize” our planet, helping them in their nefarious schemes. If such a group really exists, we wouldn’t know about it, but some UFO buffs are convinced a “real” syndicate exists that works “outside” the government as a “transnational corporate entity.” That would mean that the syndicate could be Coke, Pepsi or the Bilderbergs.

December 22, 2012
In the final season of the X-Files, it is revealed that the aliens were planning to “re-colonize” Earth on December 22, 2012.  This was also the supposed date of the end of the Mayan Calendar, which was predicted by many in the popular UFO community to be the “end of the world.” Although anthropologists noted that the “end” of the Mayan Calendar was a misinterpretation, the frenzy around the end of 2012 was very popular among UFO fans. [NB: Nothing earth-shattering happened that day.]

UFO Cults
In the final season of the X-Files, a cult leader named Josepho is in charge of a group of UFO fans and adherents that is excavating a flying saucer that crashed in Alberta. A number of actual UFO cults and religions have formed and do exist today. The most notorious was the Heaven’s Gate cult of which its members committed suicide in 1997, believing they would be resurrected as spiritual entities on board an alien spacecraft hidden behind Comet Hale-Bopp. Some present-day UFO groups have characteristics reminiscent of religions, such as believing they are in telepathic contact with “Space Brothers,” being selected to receive personal messages from aliens to raise their “consciousness,” and being guided by aliens in their everyday lives at work and in their communities. They often charge large fees to participants during private “contact” sessions at isolated camps, resorts and ranches.

Crashed Flying Saucers
Another theme in the X-Files is the discovery of a crashed alien spacecraft. The most familiar of these stories is that of Roswell, where in July 1947 pieces of a crashed object were recovered by the military. Dozens of other crashed saucer stories exist, although none in Alberta, where one crash is depicted in the TV show. However, in April 2001 a small crater was found near Etzikom, Alberta, following the sighting of a UFO. Curiously, an expert on meteorite craters did not think it was caused by a meteorite, leading some to think it was created by a flying saucer.

Cigarette Smoking Man
One of only three characters to appear in both the pilot and finale of the X-Files TV show is the person known only as the Cigarette Smoking Man. TV Guide actually listed him among the greatest TV villains of all time. Portrayed by Canadian actor William B. Davis, the character is a kind of “Deep Throat” who feeds Mulder and Scully information to assist them in their investigations, for nefarious reasons of his own. Part of the UFO mythos is that at least one such person really exists and has manipulated UFO investigators and researchers over the years. In the final episode of Season 9, the Cigarette Smoking Man seems to have been killed off…. Or was he?

“I Want to Believe”
The poster on the wall in Mulder’s office has become one of the most copied and persistent Internet memes. It is itself a copy of a UFO photograph largely believed by serious ufologists to be a crude hoax. The image is taken from a series of saucer photos offered by Swiss contactee Billy Meier in the 1970s, who claims he met a female alien named Semjase who took him on board her “beamship” to other planets, galaxies and even time traveling to the age of the dinosaurs. Copyright claims on the original Billy Meier photo #494 is said to be one reason why the poster was changed slightly in later seasons.

Do Aliens Exist?
Astronomers have been discovering many exoplanets (like the Earth but outside our Solar System) during the past several decades. Some have even been described as being similar to Earth in composition, temperature, distance from their stars and having an atmosphere somewhat like our own. None have been found to be true twins of Earth, however, and most are very far away. If there were aliens on those planets, they would need to have discovered a method of fast interstellar travel that might violate our known laws of physics. Nevertheless, most astronomers believe that extraterrestrial life exists elsewhere in our galaxy.

The Truth is Out There

The X-Files returns to television on January 24, 2016, on (appropriately) the FOX Network.

For more information about UFOs, including the Canadian UFO Survey, visit:
http://survey.canadianuforeport.com

For details on the M-Files, a detailed study of UFOs reported in Manitoba, visit:
http://www.canadianuforeport.com/survey/manitobasurvey.html