Re-entries of rocket boosters... and UFOs


Recently, a list of rocket booster and satellite re-entries was generated by a very diligent space fan, Ted Molczan. He had previously identified the "Giant Yukon UFO" as the re-entry of some space junk that had occurred about the same time as the observations of that infamous UFO. I and others have expressed our reservations that all of the 30+ observations were a re-entering spacecraft, but many skeptics are completely convinced.

But Molczan took it upon himself to go one better. He generated a list of re-entries that would have been visible to the naked eye, under the assumption that these re-entries would explain many UFO reports. It's a fascinating list, and an excellent body of work that must have taken him quite a while. I recommend that UFO buffs take a good look at it:

Since we recently completed the 25-year study of UFO reports in Canada, I realized this would make an interesting comparison with known observational data. Specifically, do the re-entries listed by Molczan during the last 25 years correspond to UFOs reported in Canada during that time?

And the answer is: yes. 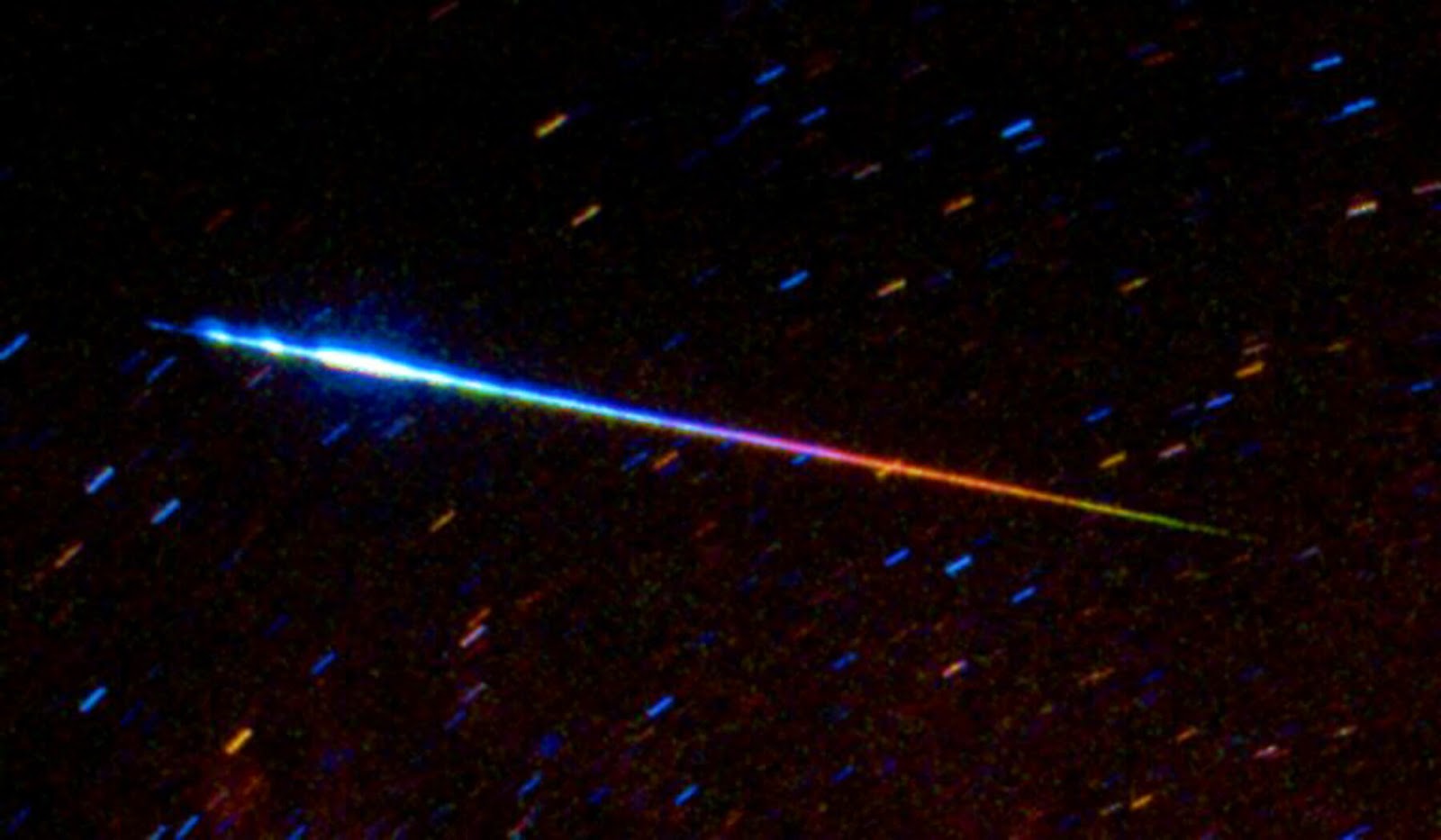 But Molczan's work shows that UFO investigators are on the right track when it comes to trying to identify UFOs reported to them.

How many more UFO sightings can be matched to known spacecraft re-entries?

One of the common explanations for reported UFOs is that of misidentified satellite or rocket booster re-entries. UFO investigators often check UFO sighting reports against lists of satellite observations as a matter of course. Skeptics have suggested that many “unexplained” UFO reports are unrecognized spacecraft re-entries, including some of the more well-known and heralded unexplained UFO cases.
Recently, a list of visually observed re-entries was generated by an expert on such things in the course of an explanation for one particular reported unexplained UFO case: the giant “mothership” seen by dozens of witnesses in the Yukon Territory on December 11, 1996. The case has been the subject of intense investigation and considerable debate, but UFO proponents insisting the observed object was mysterious, but skeptics are adamant it was simply a re-entry of a rocket booster.
The list is quite interesting because it allows a comparison of known re-entry data with UFO data from the 25-year period of study of the Canadian UFO Survey. Out of 14 re-entries on the list noted as being observable in Canada during the past 25 years, four did not generate any UFO reports at all. There were 53 UFO reports that matched times of re-entries, all but three of which were either explained, had insufficient info or were thought to have possible explanations (and noted by the UFO reporting organizations as bolides or re-entries).
In other words, ufologists were able either to identify the re-entries as what they were or did not consider them UFOs in 50 out of 53 reports. This can be interpreted to show that UFO investigators are generally able to differentiate misidentified UFOs in at least 94 per cent of cases known to be spacecraft re-entries. Ardent skeptics may not be the only ones capable of explaining UFO sightings.
The one other case that is of some debate is Case 4, where a “Giant UFO” was described by dozens of witnesses located post hoc by a UFO investigator after some months had passed. The case was therefore not included in the Canadian UFO Survey for that year. Forensic historical UFO research has shown that these sightings may be related to the re-entry event that night, although witnesses of the UFOs that night described objects with structure and discrete form, lasting a significant length of time. In fact, two witnesses described large circular objects passing directly overhead, and two witnesses separated by only a few miles described radically different angular views of the apparently same object, something impossible if the observed object was actually a spacecraft re-entry almost 150 miles up in the atmosphere. (Unless, of course, the witnesses were lying or badly mistaken.)
Also, one only has to look at the descriptions of other misidentified re-entries in the list to see that witnesses in most cases used terms such as “fireball,” and “ball of light trailing sparks,” “tail on fire,” “comet-like,” “airplane on fire” and so forth. The Yukon case involved multiple independent witnesses who described large objects with a shape and form, not just strings of lights that could be a fragmenting re-entry.
Also, debunkers note that UFO investigators investigate UFO cases in a linear progression of steps, with “Step One: Assume the testimony is reliable.” They note that eyewitness testimony is in fact usually unreliable, so that judging the worthiness of a UFO report on witness testimony is inappropriate. However, as we have seen in this brief study, witness testimony was considerably reliable in explaining known fireball cases reported as UFOs, investigated and classified by UFO investigators themselves.
In summary, the excellent work by Molczan in compiling a list of spacecraft re-entries that might explain some UFO cases is admirable. However, UFO investigators without the list were generally able to assess the validity of UFO reports shown later to match the re-entries. The one standout case was that of the Yukon case of 1996, which is still debated among ufologists and debunkers.
It is recommended that all ufologists familiarize or reacquaint themselves with the appearance of terrestrial spacecraft re-entries, and ensure the possibility of such an event is considered when evaluating UFO reports.

There were four reports filed that seem to coincide with the date of this event. Only two were from Manitoba, and both were described as fireballs or bolides with long tails, fragmenting as they flew. One was reported to the National Research Council, while the other was reported to Ufology Research directly. Curiously, the other two possible matches were from Quebec, two hours earlier than the re-entry, but were also described in terms of a fragmenting fireball. In fact, the NRC report notes that it received 15 reports of observations – many more than Manitoba. Given this coincidence, it is possible the re-entry calculations were in error with regards the extent of observable locations. Two of the reports were classified as “Insufficient Information,” likely because the NRC file was incomplete, and two were classified as “Probable Explanation.”

One UFO report was found matching the re-entry perfectly. It was classified as Unknown because the witness was a reliable observer. However, the witness only reported “lights,” so no structured object was described.

These four reports appear congruent with the re-entry event. Two had insufficient information, and one was listed as “Probable Explanation” because of the description “airplane in flames” which is a common description of a fireball. The report listed as “Unknown” is curious because it has descriptors unlike a re-entry. The sighting at 0315 hours local was noted as a “Close Encounter,” yet in time and location matches the re-entry.

No sightings reported during this time period.

Although the Molczan list suggested this re-entry would be observable over the Maritime provinces, no UFO sightings were reported.

No sightings reported during this time period*

Similar to Case 2, although the Molczak list notes widespread observations. No one reported seeing any UFOs at the time, even though there was at least one news report about the event. However, this case is the noted “Giant UFO in the Yukon” for which there have been found numerous witnesses long after the fact; this sighting was therefore not included in the 1996 Canadian UFO Survey.

There was only one report of a UFO, at it exactly matches this re-entry. It was easily identified as such and classified as “Explained.”

No UFO reports received during this time period.

This is an interesting event, since there are eight possible matches with this re-entry. Seven reports came from eastern Canada and the Maritimes, but only four are good matches with the re-entry, and two are possible matches. The report from Edmonton is unlikely to have been related. Several witnesses accurately described fireballs with long tails. All of these UFO reports were classified as “Explained” or “Probably Explained.”

The two reports around 2100 hours on January 31 could match this re-entry. One was suspected to be a re-entry, while the other did not have sufficient information for evaluation at the time.

One report received during this period, explained by investigators as an early morning satellite re-entry.

None of these reports received that night seem congruent with the re-entry listed. However, MIAC recorded a bright fireball a few hours earlier; perhaps this was a fragment? None of these UFO reports were classified as Unknowns.

This was obviously a well-witnessed re-entry event. There were 22 reports from that area on that date, with 19 apparently related. The DD report at 1100 is clearly unrelated, for example. It is interesting to see that the time of observation varied considerably, from 2145 to 2300 CT. Most reported times do generally agree with the actual time of re-entry. Also, in all but one case, the report was recognized as a fireball and/or re-entry and given a classification of “Explained.” The single exception was the report from Windsor in which witnesses reported seeing a fireball, but then also saw 3 small objects after the original event, leading to an “Unexplained” evaluation of the report.

These five British Columbia UFO reports match the re-entry and were easily identified or suspected to be fireballs or re-entries.