Ufology Research has released the results of its 25-year-long study of Canadian UFO reports.

Most ufologists and Forteans know that Ufology Research, formerly UFOROM (Ufology Research of Manitoba), has been collecting and reviewing Canadian reports since 1989, publishing the results as the annual Canadian UFO Survey. When the 2013 edition was published in 2014, it marked 25 years of the annual analyses of UFO report data. 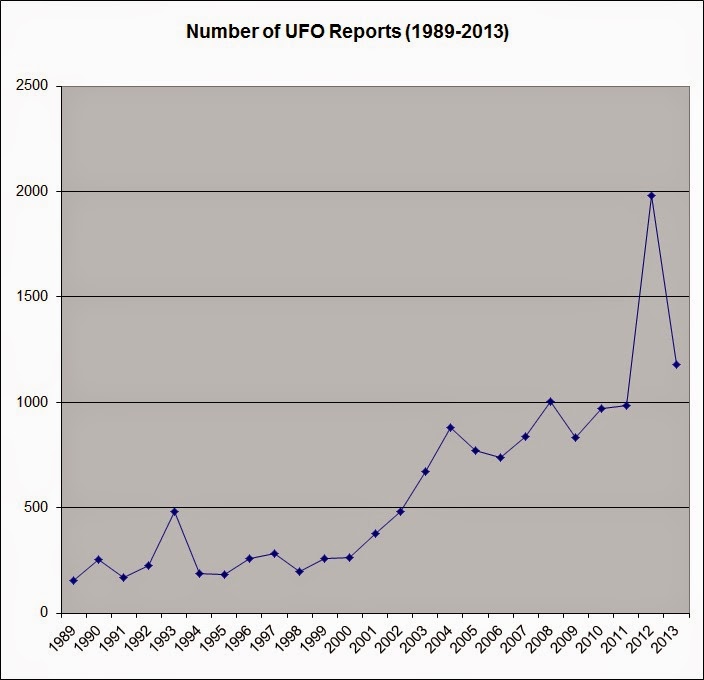 It seemed reasonable, then, to group all 25 years of data together and examine the data for trends and changes with time over a quarter of a century. When the final tally was produced, there were almost 15,000 UFO reports received as data since 1989. Coincidentally, this almost exactly matches the total number of UFO reports collected and analysed by the United States Air Force Project Blue Book during its official run of less than 20 years from 1952 to 1970.

The Ufology Research study is titled "UFOs Over Canada: 25 Years of UFO Reports." It is available from the Canadian UFO Survey web page here. In addition to the text document, the entire 25-year report database is also viewable.

The 25-year study should not need much explanation to those familiar with the annual Canadian UFO Survey. However, an outside reviewer has suggested I make a few points to clarify the process of collecting and analyzing the data.


First, in addition to UFO reports being received as data from UFO organizations and investigators, cases were also received and collected from official agencies such as the Royal Canadian Mounted Police (RCMP), Canadian Forces, Transport Canada and other official bodies. This is very unlike the American experience, where official agencies have not, in general, made UFO reports easily available. (UFO reports were also received for this study directly from witnesses, of course.)

Second, a word about hoaxes. In short, while hoaxes cannot be ruled out, the number of hoax reports that have ended up in the database is quite low. In fact, in most cases where a hoax was suspected or discovered, this has been noted in the data. One reason why hoaxes are minimal with respect to the larger body of data is because a very large percentage of reports could be explained or thought to have possible explanations. In other words, these reports were not hoaxes but honest mistakes, and there were real objects in the sky to misidentify.

Third, although we believe we have captured a rather complete set of sighting report data for this study, the database may not include all Canadian UFO sightings during the past 25 years. It is known from other studies that only a fraction of all UFO sightings are ever reported―this percentage is thought to be around 10 per cent. Our study reflects only those sightings which were actually reported to UFO groups or official agencies. Also, which we were able to obtain many reports from official agencies, it is very possible that an unknown percentage of cases are never officially released, although the Canadian government has been very transparent in this regard, with thousands of UFO-related documents always being available to the public either at the National Archives in Ottawa or online.

Next, our study shows that people are reporting sightings of unusual objects, some of which have no simple explanation. This result has no overt bearing on the question of extraterrestrials visiting Earth. The interpretation that some of the unexplained cases may represent alien visitation is left to the reader to speculate. What can be said is that UFO witnesses have, in general, not been hallucinating or making up tall tales; UFO witnesses are indeed seeing unusual objects in the sky for which they have no explanations.

Also, while the level of good investigation of UFO sightings has been regrettably low, some UFO groups such as MUFON have made excellent strides in educating lay investigators and encouraging proper UFO investigation.

Finally, this study was only made possible through the dedication of a handful of individuals who have taken the time to express curiosity about what has been reported by Canadians as UFOs during the past 25 years. Data collection is very time-consuming, and moreso thorough case investigation, which is done only rarely in the present-day field of ufology. If every one of the nearly 15,000 cases studied were completely investigated, what would the results have been?

Regardless of one’s belief in the “reality” of UFOs (however that may be construed), studies such as ours affirm that there is a persistent phenomenon that deserves further scientific study. If UFOs are not “real,” then why are tens of thousands of Canadians (and others worldwide) seeing unusual objects in the sky? Is there a need for better education of the masses? If there is a residual percentage of truly unexplained cases, what do these represent? Alien visitation? Clandestine military exercises? A hitherto unrecognized natural atmospheric phenomenon?

Our study 25 Years of Canadian UFO Reports is presented for your consideration.