The media is abuzz about the Toronto UFOs that were seen on Saturday, July 26, 2014. Multiple witnesses observed and took videos and photos of a series of lights in the sky over downtown TO.

In the afternoon, at 4:18 pm, Sebastien Setien was on the balcony of his condo when he saw a triangular object in the sky. He took a photo of the object, which he noted was not moving at all, and he lost interest and went inside. Later that evening, at 8:40 pm, he went back outside and saw some odd lights, so he used to phone to capture a video.

Toronto police say they first received a call about lights over the city at about 7:00 pm. Police officers themselves saw  the lights at about 10:00 pm, so this was certainly not a fleeting phenomenon. they confirmed to reporters that the lights were not from a "police drone."

At around 9:00 pm, Sarah Chun was in her Finch Street apartment when she saw 6 or 7 lights arranged in a diagonal line in the sky, seemingly "anchored" to the ground at one end. She grabbed her iPad and went outside to take a video of the odd sight. Outside, she saw another object that was high in the sky and very bright. She said the high light "sat there" for about 25 minutes and then moved off and disappeared. She posted two videos of the lights to YouTube and they both went viral. 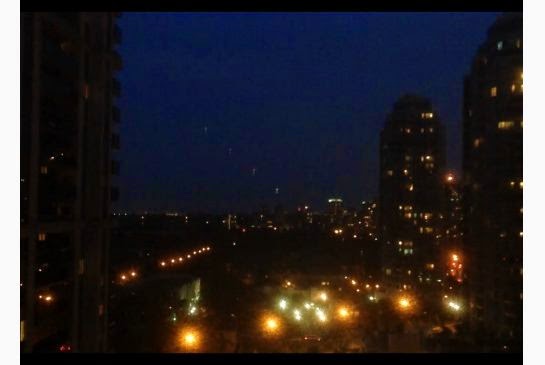 Several media reported a claim by a witness who said he had seen some kids setting up a kite with LEDs near the area where the UFOs were thought to have been.

My colleagues Sue Demeter St-Clair and Matthew James Didier of PSICAN are hot on the trail of these UFOs. Here is their web page on the incident, with updates and additional relevant links:

A nice graphic on Canadian UFOs, based on our Canadian UFO Survey (http://survey.canadianuforeport.com) was published by the Toronto Sun:

Our best guess so far is that the string of lights was possibly indeed a kite with LEDs, as drones wouldn't have been as stable as reported for such a long period of time.

The case is still under investigation.