Who ya gonna call?
Apparently, you should be calling Paracon. At least, if you are going to the Marlborough Hotel and want to know about its strange and paranormal history.
The stately Marlborough is turning 100 this year, and as part of its celebration, paranormal investigators have been allowed to explore its various hallways and rooms said to be haunted by ghostly denizens.
On June 20, 2014, the Winnipeg Paranormal Group held a special “ghost tour” for anyone brave enough to explore the hotel with them. The Group is hosting Winnipeg Paracon (paracon.ca) this coming September, bringing in many guest speakers from TV and other media to discuss hauntings far and wide. The two-day conference will feature séances, tours of haunted Winnipeg locations (including the Marlborough) and VIP dinners.
But last week, it was all about the Malrborough. Banquet Manager Grace Rents welcomed about a dozen hardy souls, including a crew from Energy 106FM, telling them about some of the things that she and other staff have seen or heard within the hotel.
There’s the Churchill Room on the main floor, where staff have had a feeling of being watched. On the third floor, renovations uncovered a sealed communal shower room, long in disuse. It’s said that one person who had a chance to look into the run-down tiled room saw the apparition of a man in a surgical gown inside, scaring the bejeebers out of him!
On the fifth floor, one macabre tale tells of the murder of a young woman named Edith Cook at the hands of a jealous suitor. She was found strangled to death in room 503, and her ghost is said to roam the hallways to this day.
At one time, the ninth floor was the exclusive penthouse apartment of an eccentric owner of the hotel, a spinster who lived by herself although she had been known to have the company of “gentlemen callers.” One of her favourite pastimes was to play a grand piano which was in a sitting room in her penthouse. Hotel staff often could hear the piano music throughout the building, echoing down the elevator shafts and along hallways. But after the woman died, piano music could still be heard…
And then there’s the Press Club, in the basement. It was once where the “old guard” of the media would gather for drinks after putting newspapers to bed. It was where the original “Beer and Skits” was held, much to the chagrin of many. But during its heyday, the basement was the location of special private dining and meeting rooms. And in 1923, no less a prominent figure than Arthur Conan Doyle himself participated in a séance in the Marlborough during a celebrated visit to Winnipeg, seeking to contact the dead.
On the night of the “ghostbusting” with the Paracon tour, the group’s leaders Sharon and “Fonz” Granger pulled out their armoury. They had proximity detectors, in case a spirit was to sneak up on us. (They were kind of theremins that responded to electrical fields with beeps and whoops.) There were cameras and video recorders with infrared imaging. And some neat random word generators that reacted to sounds and when you asked them questions. (The idea was that a ghost might want to manipulate them to “speak” through them to us.)
Grace first led us up upstairs to the third floor, where we looked inside the third-floor shower stall. The tiles are cracked and falling off the wall, there’s a hole in the ceiling where pipes have burst, and there’s a smell of mould. Nothing jumped out at us. However, one woman on the tour felt a sharp pain in her shoulder and then an overpowering sense of despair, “as if something terrible happened in the shower room!”
Oddly enough, when we were taken up to the fifth floor, where a murder was known to have taken place, no one felt anything out of the ordinary.
The big treat of the night was being allowed up to the ninth floor into the former penthouse. It’s been converted into a series of meeting rooms and small dinner halls now, but the view from its windows is spectacular. Members of the group wandered around in pairs or trios, taking photos, trying to “feel” something and just get a sense of what may or may not have been in the room. After a while, Grace sat us down and told us more stories, in particular some about the Garrick Theatre that had been incorporated into the hotel’s amenities some years ago. The Garrick’s four theatres were still used for some corporate events (and some late night dance parties or raves, apparently), although one theatre had been converted into the hotel’s pool (complete with a corkscrew waterslide!).
One story is that a bar manager in the theatre lobby had been closing for the night and distinctly heard the voice of a young, giggling girl running by―but there was no one to be seen, and the theatre was locked. Other staff had sworn they had seen a ghostly figure in the women’s washroom downstairs, but all the stalls were investigated and found to be empty. And in the men’s washroom, the motion-sensor-activated hand driers have started up when there was no one near them. (They never seemed to work for me even when I frantically waved my hand under them!)
Grace then led us into the darkened Garrick theatres. It was spooky, for sure, but nothing out of the ordinary was seen or heard by the group as we walked up and down the steep aisles and sat in the well-worn seats. Nevertheless, tape recorders were running the entire night in all the locations, so the Paracon group has some listening to do and will let us know if voices from the ether were trying to communicate.
Is the Marlborough haunted? Grace and other staff believe it is. But during the tour on June 20, none of us can say that ghosts were present.
Do you believe?
Boo! 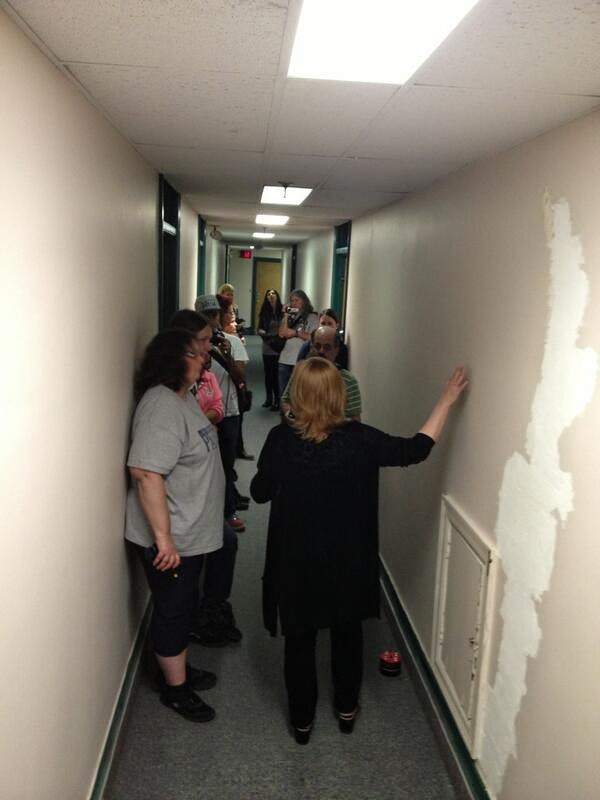 The group on the 5th floor, listening to Grace describe the murder scene. 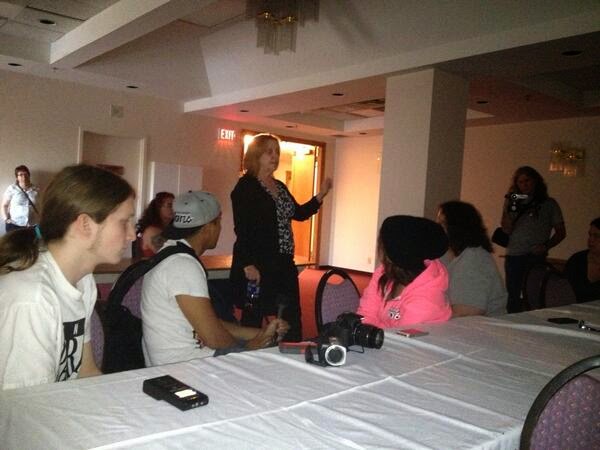 On the 9th floor, as Grace Rents tells more stories from the Marlborough. 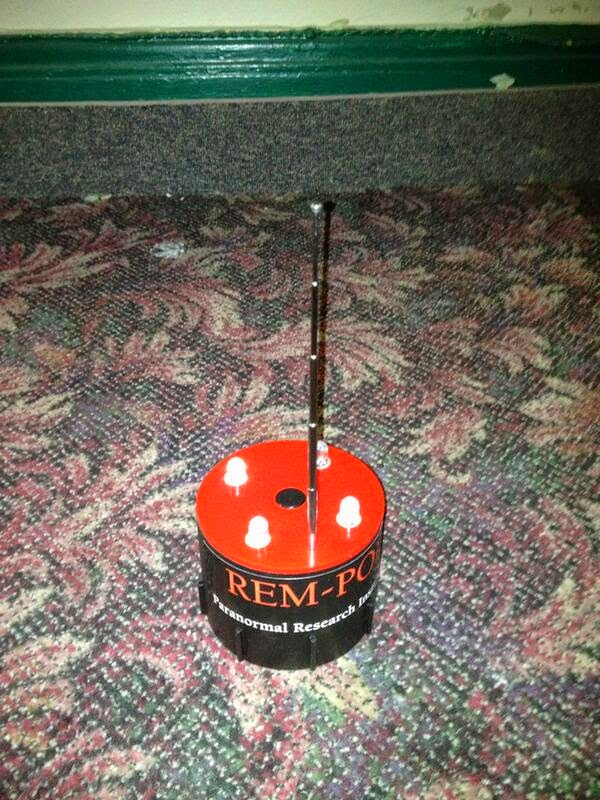 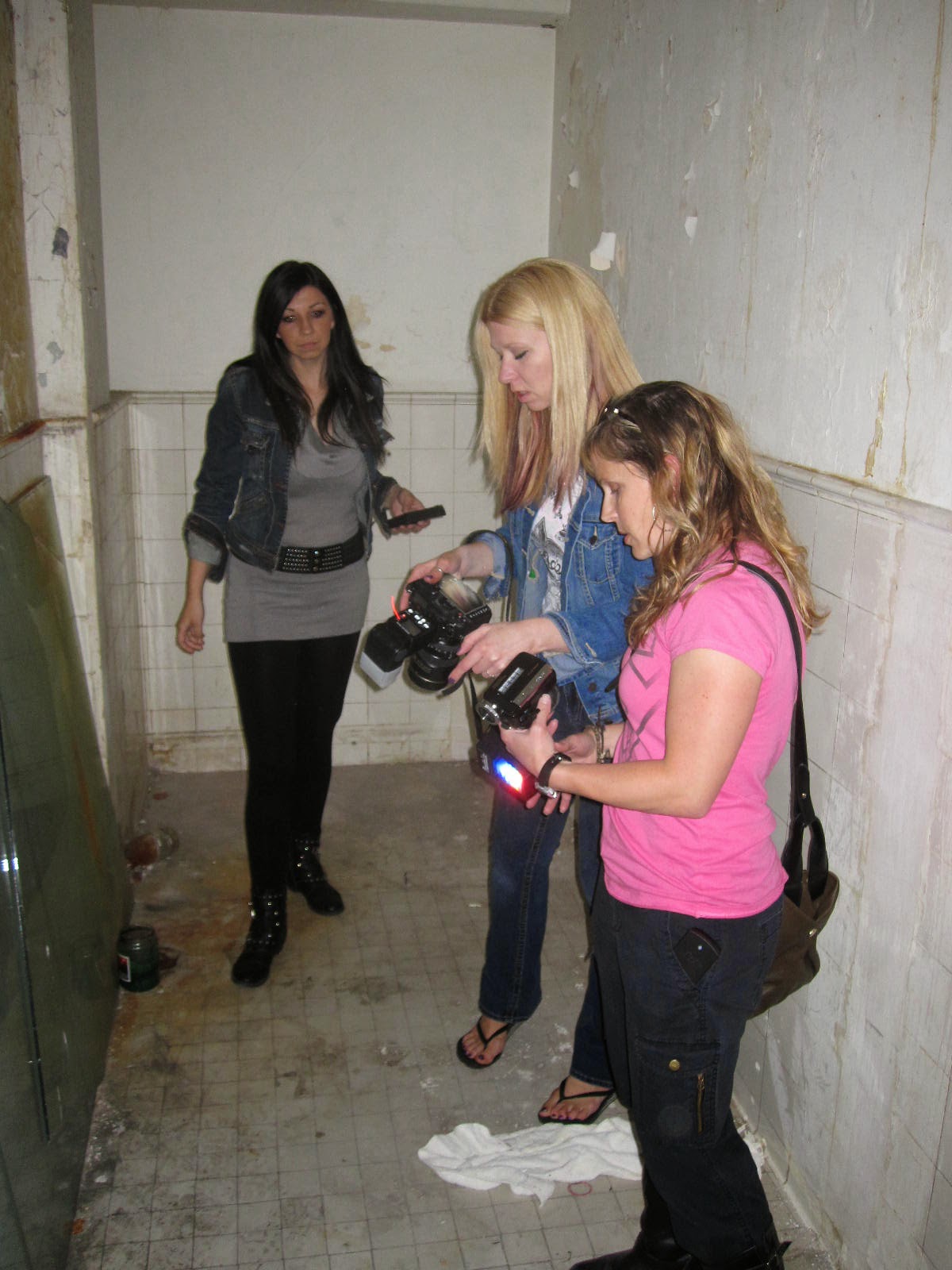 Kelly Smith (at far right), with two of her associates from the Winnipeg Paranormal Group in the 3rd floor shower room. 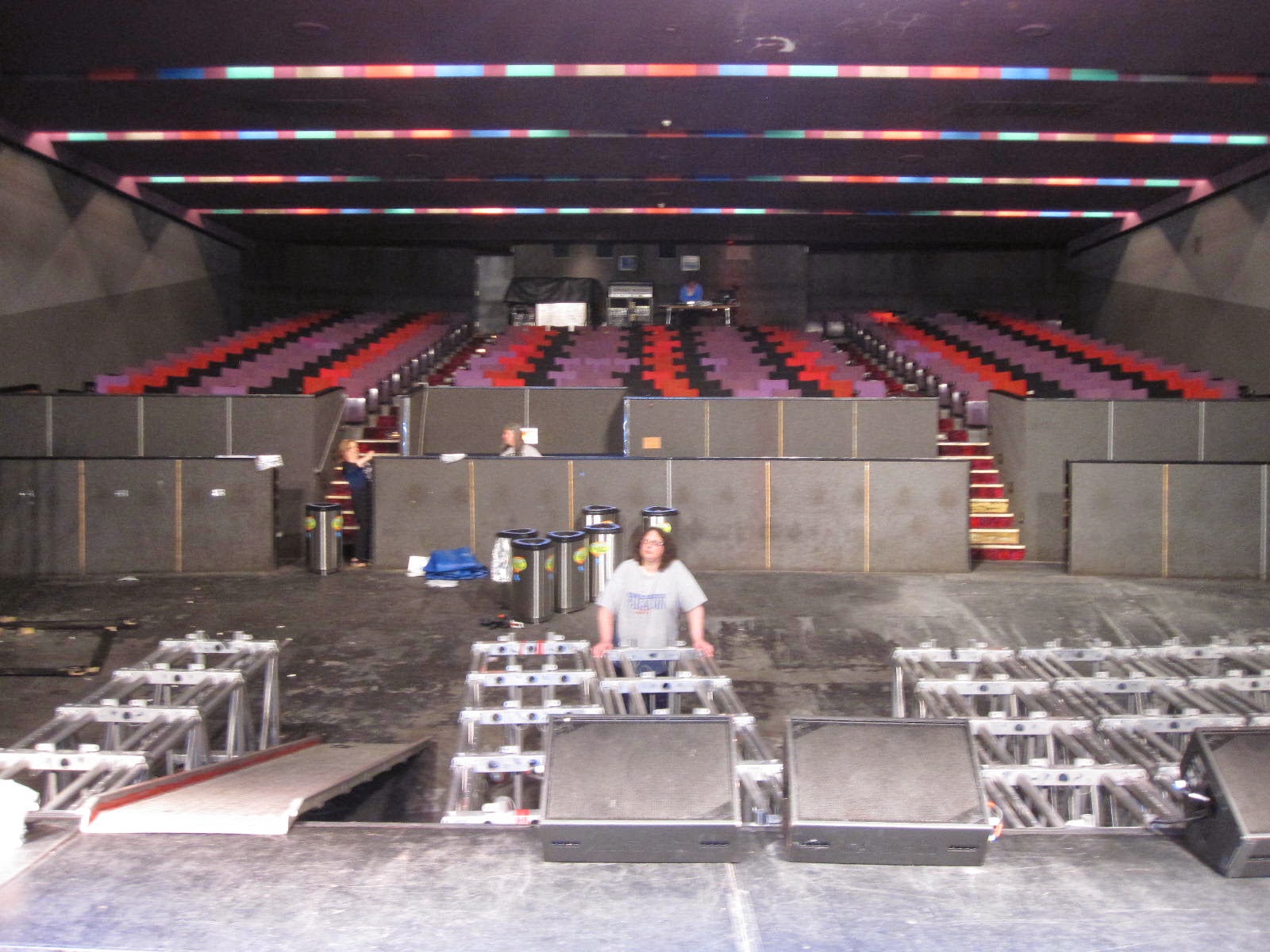 Sharon Granger in the Garrick Theatre. 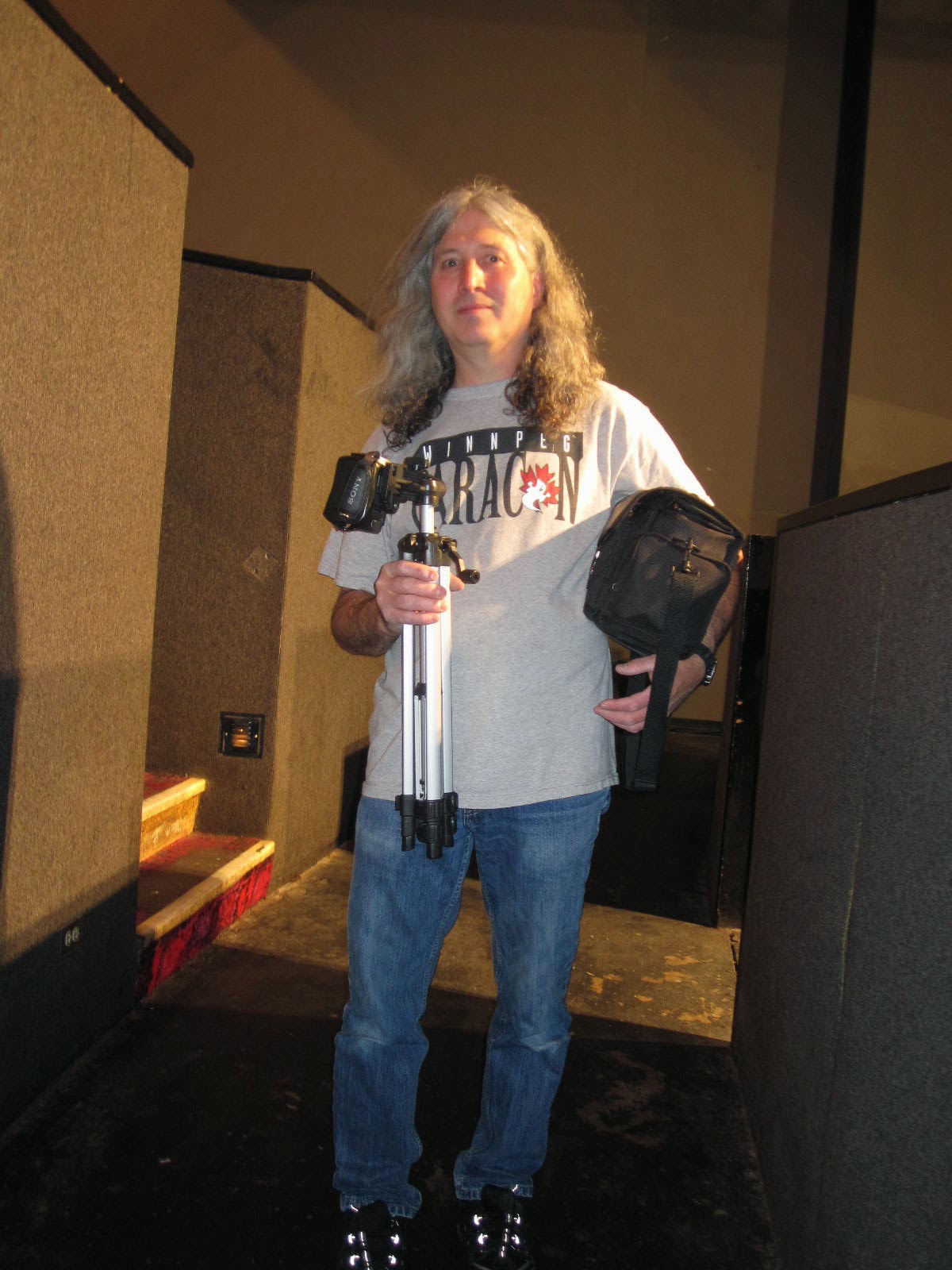 "Fonz" Granger in the Garrick Theatre. 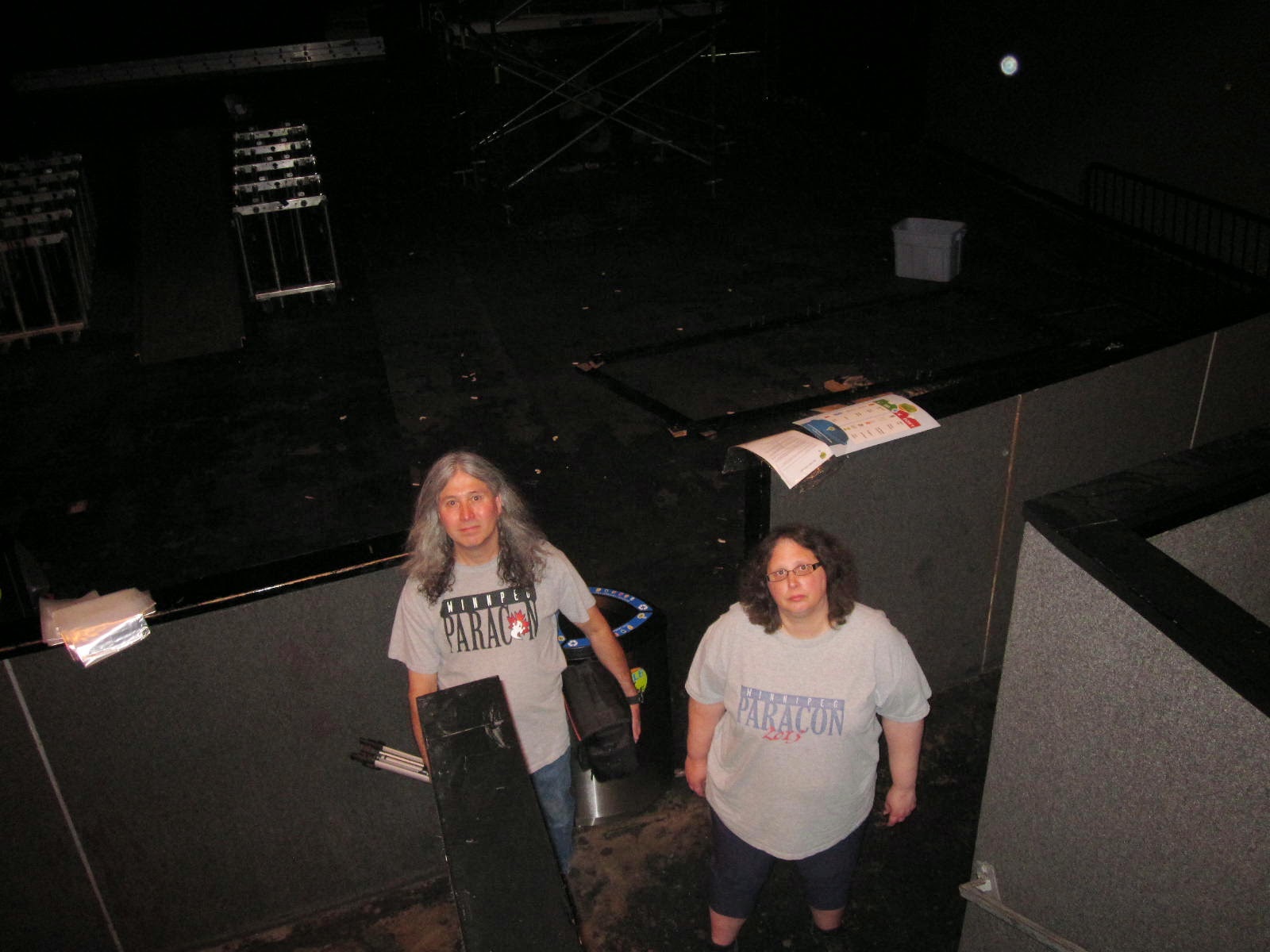 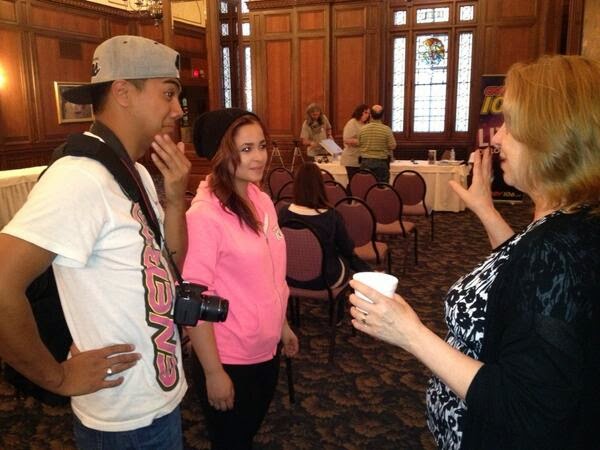