So C4 is, like, about 40,000 people and about half of them are dressed in costume. I saw several Doc Ock (males and females) and even a young girl dressed like Buzz Lightyear. There were zombies and ghouls galore, lots of Adventure Time characters and awesome displays of creatures and artefacts made by fans of Bioshock, Halo and both Trek and Star Wars.

And two floors of huckster booths, where vast amounts of money were exchanging hands. And not just a few dollars here and there. It was not unusual for collectors to be plunking down three figures for sought-after items, hour after hour.

So I was at the Manitoba Writers Guild table on the second floor, next to a makeup artist doing zombie stuff and not far from someone with a working 3D printer making toys. I was sitting with Melinda Friesen, a children and young adult writer whose blog on writing is an excellent reference (vastimaginations.wordpress.com).

Melinda was dressed as Wonder Woman, and told me that she was a bit creeped out by some guy on the bus she rode to get to C4. He had told her he loved her, apparently.

I was dressed as the dead Astronaut Clooney from Gravity. I was stopped about a dozen times by fans with cameras. Not sure if I'll ever see those. I know that tedsaliphoto.ca took a shot of me so I'll pop that in here if I find it. Ted was dressed as Jamie from Mythbusters, shaved head and all. Awesome.

[Found a photo of me by Carolyn Gray of the Guild: 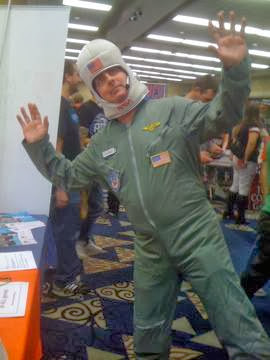 We were giving out brochures about the Manitoba Writers Guild (www.mbwriter.mb.ca) and talking with aspiring writers about their passion for putting pen to paper. Or, I suppose, electrons to screen. We were selling the Guild's new "Writers Blocks" as a fundraiser. (Only $5 from the Guild office otherwise.) I was also trying to interest people in my book about Manitoba UFOs and paranormal phenomena. 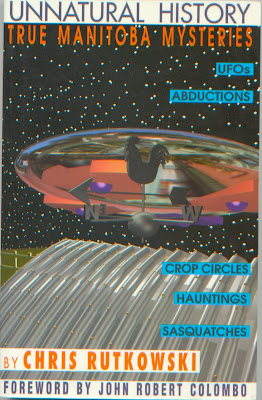 My big scores this time round: 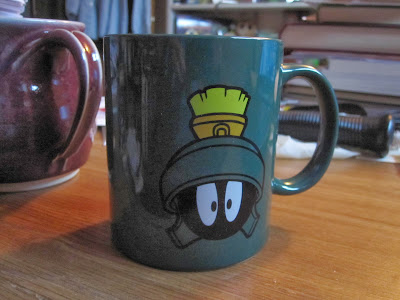 And Donna bought me a real gem from comic dealer Mike Hoppensack, of Thosedamcomics, who had a prominent display on the third floor.

I didn't know that this even existed. It's a special issue EC comic from 1954, titled: "E.C. Challenges the U.S. Air Force with this illustrated, factual Flying Saucer Report." (Volume 1, No. 26, December 1954) 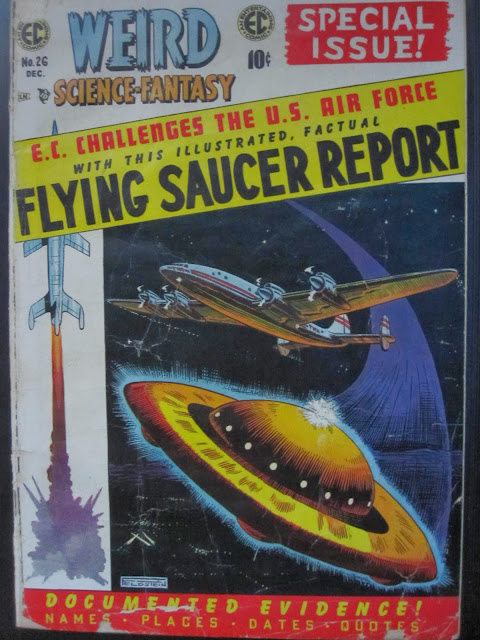 In effect, Weird Science Fantasy took a departure from its usual issues featuring SF by Ray Bradbury and Otto Binder (and Adam Link stories) to feature visual adaptations of actual USAF flying saucer case files. The comic included the Mantell case, La Paz, BOAC and other famous cases, ridiculing the Air Force at every turn for denying that flying saucers are real. "What about THIS, is THIS just Venus?"

After many pages of text-heavy panels detailing report after report, the special issue concludes with a remarkable challenge to the Air Force, asking a series of thoughtful questions about flying saucers, many of which have not been answered today. 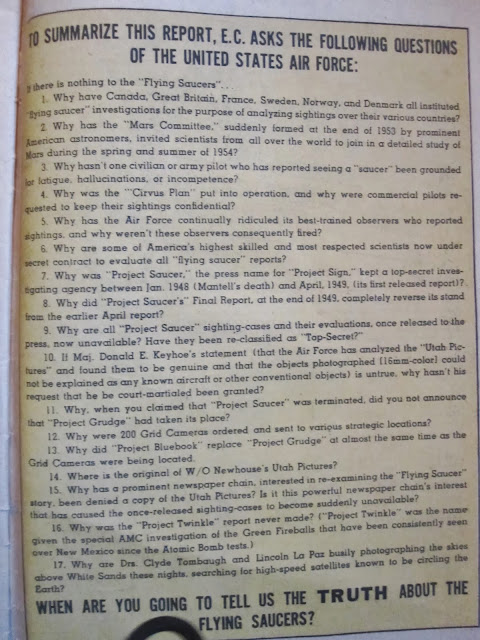 I leave my readers to answer these questions, if desired.