On a clear night, you can see Lakshmi Planum

Anyway, tonight as I was driving home, I noticed that Venus was absolutely brilliant, low in the southwest sky. It was really clear out, and the air seemed quite still, which meant perfect observing weather. 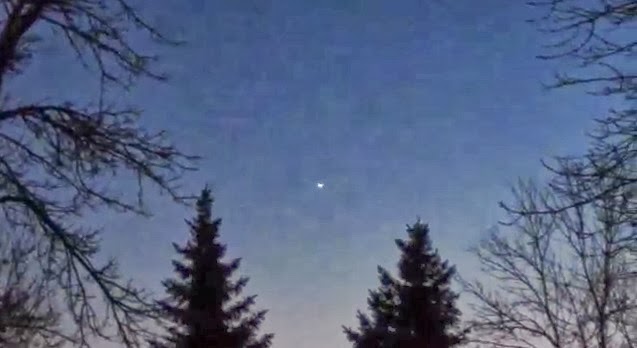 It also means perfect UFO reporting weather. I bet myself that I would get reports of a UFO tonight.

On an impulse, as soon as I got home, I got out my tripod and camera and set it up facing southwest, pointing right at Venus. I shot 10 seconds of video, then zoomed in and shot 10 more seconds. Then I took the camera off the tripod and shot ten seconds of hand-held video. All three were taken around 5:30 pm CT, on November 26, 2013, at Winnipeg, Manitoba. Canada.

I went inside and uploaded all three videos to Youtube. Links are here:

It took about an hour to get a UFO report.

My phone rang at about 6:30 pm. It was a guy who said he had been given my number as a place to report UFOs.

He said he and a friend had been watching a bright light in the sky for about an hour. We talked for a few minutes, and I encouraged him to send me an email to formally file the report.

This is to report an strange light in the sky seen in the SW part of Winnipeg. As reported to you on the phone the light was hovering quite high in the sky and as i write it remains there. This has been over an hour since the first sighting and from what I could see it looked like more than one object that would intermittently move apart or, to the naked eye, get larger and then smaller. As well we could see blue lights as well as the white light emanating from the object[s]. Just wondering what it could be.

He added this part about 15 minutes later:

Just went out to look again and it is now much lower in the sky and more westerly than before. Initially when seen by my friend who is a professor at the UofM he reported that it was much higher in the sky and also very very bright.

So here's the ufologist's dilemma: Venus was definitely in the sky and brilliant, just begging to be reported as a UFO. If that's not what the two witnesses were seeing, what was their UFO? A star chart shows that Altair was bright and high in the southwest too. Would they have mistaken a star for a UFO?

The big tipoff for me is the duration of the sighting. Anything approaching an hour is definitely a star or planet, regardless of how much it appears to move around and change size.

Comments:
Looking at the videos, I am impressed by the brightness and (apparent) size. Not being a sky watcher, I would have assumed a distant planet reflecting light would be a miniscule dot. But that's big enough to fool one into thinking is was a nearby object travelling in our atmosphere.

Now I can better understand how UFO fandom would resist such an explanation.

It is impressive when one looks at the reports in detail and analyses the content. One project I've always wanted to do is create a series of videos documenting commonly-reported IFOs and showing how they can be misidentified.