On politics, media and UFOs: "Please tactfully say 'NO' to CBC"

When I have some spare time, I take a look at some of my ongoing projects sitting on various parts of my desk. (Most are related to the subject of UFOs, but not all.) One project is the perusal and “mining” of the thousands of Canadian government documents about UFOs that are housed at the National Archives but which have been slowly scanned and made available online. (I've noted earlier that the Canadian government did not recently participate in "disclosure" because these documents were available for many years at the National Archives and only recently were scanned and put online to make it easier for researchers,)

As readers of this blog will know, some of the docs found so far are remarkable, showing significant military involvement in UFO cases, including reports by many military witnesses. Some have significant physical evidence that don’t seem to have been adequately studied, and others appear not to have easy explanations. (Most cases, of course, are explainable.)

My most recent discoveries include a series of memoranda regarding an inquiry by the Canadian Broadcasting Corporation (CBC) in Winnipeg of the Department of National Defence for assistance in preparing a television or radio documentary on UFOs. Dated Feb. 22, 1965, a confidential and formerly classified telex from the Canadian Air Training Command in Winnipeg to Canadian Forces Headquarters in Ottawa reads:

CBC Winnipeg want to do programme on UFO sightings. This asked for background of any RCAF input or procedures that are followed. Advise current policy. 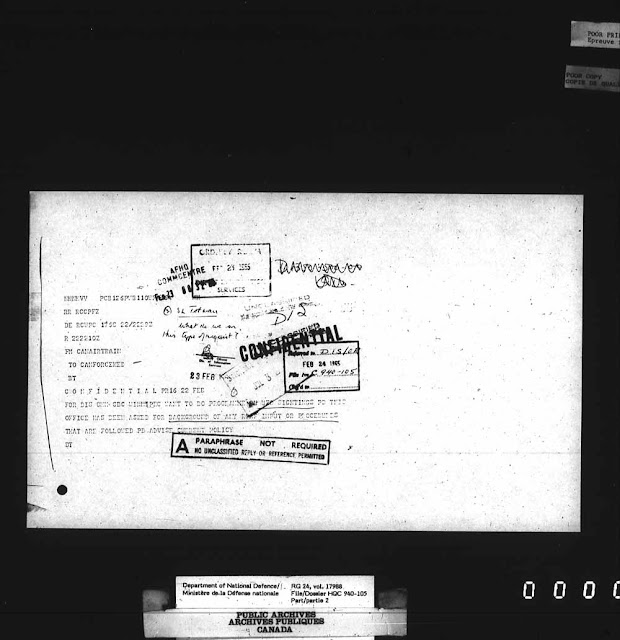 That same day, a confidential DND Minute sheet was prepared by a military secretary named Totman for the Director of Information Services. It was sent to the Directorate of Air Intelligence, to the attention of “W/O Hardy(?)” It read:

2.       I suggest the policy would be to stay clear of this type of program except to answer this query with information contained in attached “form letter” that has been used by FFR (now DIS) for some time.

Unfortunately, there was no “form letter” in the file, so we are left to wonder what it might have been. Fortunately, there are some examples in the collection of documents of letters sent to individuals requesting information about UFOs. It’s likely that some variant of these was considered. 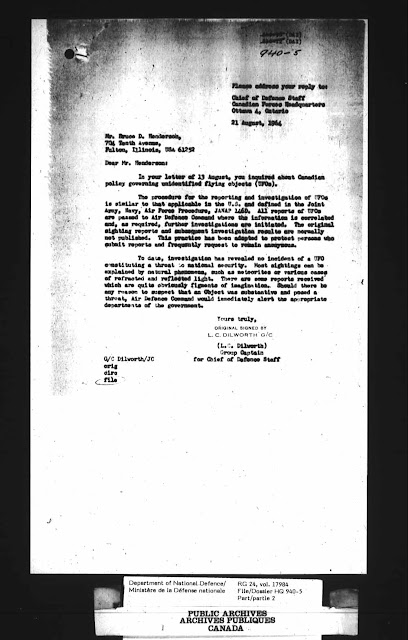 Four days after the Minute Sheet was opened, on February 26, 1965, an annotation was made on this Minute Sheet by “E.L. Bowey” of the office of the Director of Information Services. He simply noted:

where the (3) referred to the first part of the Minute Sheet.

The following week, there was correspondence between Ottawa and the DND Office of Information in Winnipeg. On March 4, 1965, Colonel L.A. Bourgeois, Director of Information Services, gave his recommendations on the CBC request.

1.       This HQ does not wish to become involved with such a program. It is policy to stay clear of this subject whenever possible.

2.       Many inquiries are received on this subject. They are answered by a standard letter as per attached copy. 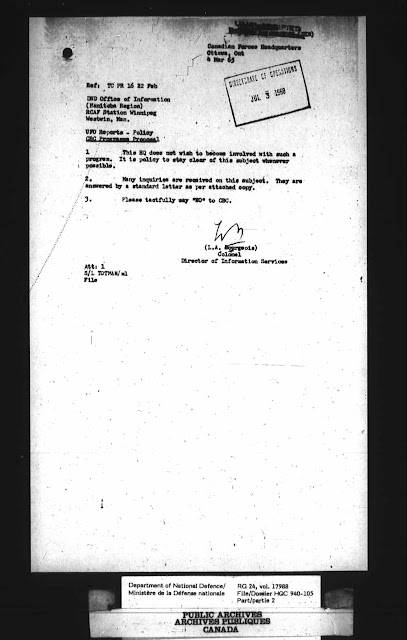 And so, the Canadian Forces set their bottom line in how to handle media when it came to UFOs. Even for “Canada’s National Broadcaster.”

One can wonder if this request and tactful response affected the way in which Canadian media handled the subject of UFOs in following years. If they were told that UFOs were nothing of interest by a high-ranking government official, that could have curbed their interest. Indeed, for decades later, the CBC was less that responsive  and interested in doing UFO stories. What would they have done if the Minister of Defence had said that UFOs were real?

Anyway, it looks like the Canadian military was not going to dally in the subject of UFOs, especially with the media.

At least, for a month or so.

Obviously, the request from the CBC must have sparked some discussion throughout DND, because within the DND files is a long, detailed four-page document titled: “Unidentified Flying Objects,” dated April 20, 1965. It was written by J.C Arnell and was subtitled: “Suggested Statement by the Minister of National Defence.” 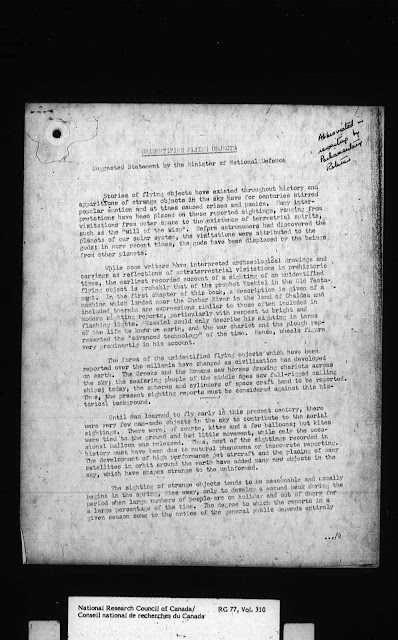 This wasn’t a form letter. It was a very specific discussion about the UFOs prepared for the highest executive in the Air Force and Canadian Forces. If this wasn’t written for the CBC, which presumably would have been a good public relations move, then why was it prepared at all? It’s also not a briefing statement for the Minister. It was prepared for him to present in some context. Also, there’s no indication that this statement was classified in any way, although it had never been discussed in public.

It’s also interesting to note who was the author. In 1965, John Carstairs Arnell was Scientific Advisor to the Chief of Air Staff and the Chief of Naval Staff. In short, he was a genius. According to National Defence Archives, at the age of twelve Arnell enrolled at Ridley College in Ontario and later attended Dalhousie and McGill universities. In 1924, at the age of only 24, he received his PhD in physical chemistry. In 1942, he did chemical warfare research for the Canadian Army and after war, joined the Defence Research Board in Ottawa. Essentially, Arnell set national defence policy in the 1960s. What’s more, it appears he was greatly involved in the decision to unify the Canadian Forces, a move that occurred in 1966-67. (This will shortly be seen as significant to the subject of UFOs.)

Arnell’s 1965 report on UFOs reiterated the American stance that “the evidence presented on Unidentified Flying Objects shows no indication that the phenomena constitute a direct physical threat to national security.” He also revealed the existence of a Canadian committee to study UFOs “some fifteen years ago” (i.e. 1950) which “ceased to function about ten years ago” (i.e. 1955). This could have been Project Magnet, run by Wilbert Smith, which was formally shut down in 1954 but Smith continued to operate unsanctioned until his death in 1962. It could also have referred to Project Second Story, which ran concurrently with Project Magnet but was involved in the collection of flying saucer reports whereas Magnet looked at teh physics of flying saucers.

Since that time, such reports as were referred to the Department of National Defence have been studied by interested staffs, and, where warranted, investigations have been made.

However, in the end, Arnell notes that most UFO sightings are explained as meteors, aircraft, balloons and meteorological effects.

After several years of study, both committees [American and Canadian] were able to explain all but a very small percentage of the many thousands of sighting reports in terms of natural phenomena and man-made objects. Among those which could not be explained were those where the descriptions were too vague for careful analysis and where the reporter was of doubtful reliability. Of the relatively few sightings of good reliability which remained unaccountable, the American committee concluded that the evidence… [as already quoted above]

It's been noted here and elsewhere by historians and researchers that the "very small percentage" claimed as the American results was actually of the order of about 20 per cent, so the statement is misleading if not simply incorrect. It has also been shown that there were many sightings with excellent descriptions and testimony by reliable witnesses.

The other point of note here is that Arnell's prepared statement was for a person who has of late been very vocal about the reality of UFOs and aliens on Earth. This was Paul Hellyer, former Canadian Minister of National Defence, who earlier in 2013 at the Citizens' Hearings on Disclosure said:


At least four species of alien have been visiting Earth for thousands of years... some of the aliens hail from the "Zeta Reticuli, the Pleiades, Orion, Andromeda, and Altair star systems" and "may have different agendas"... and "there are live ETs on Earth at this present time, and at least two of them are working with the United States government."

In 1965, Paul Hellyer reviewed the prepared statement for his presentation that stated UFOs were nothing of interest or importance, but 40 years later after his retirement from public office, in 2005 at the University of Toronto, he said that

UFO's are as real as the airplanes flying overhead.

He noted at the Hearings:

Although as Minister of National Defence I had sighting reports of UFOs, I was too busy to be concerned about them because I was trying to unify the Army, Navy and Air Force into a single Canadian Defence Force.

So, when he was in a position to do something about the reports, he didn't see them as particularly worth bothering with. But today, they are the most important issue on the planet, since Hellyer now believes working with the aliens to save the Earth is essential to the survival of humanity. His testimony at the Hearings ranged from simple cover-up to Bilderberg Conspiracy.

Quite an amazing about-face.

Comments:
Is the J.C Arnell document available online at Library and Archives Canada ? I haven't found it yet (but George Arnell wanted at Calgary for obtaining horses under false pretences in 1913.)

I'd be curious to read it, esp. about Wilbert Smith.