Reactions to the 2012 Canadian UFO Survey

Despite the fact that the review of 2012 data on Canadian UFO cases showed an unprecedented 100% increase in reports, ufological chatter about the Survey has been almost nonexistent. Yet, whenever the “Ata” skeleton was mentioned in UFO groups and online lists, the resulting discussions and flame wars filled volumes – and it doesn’t seem to have anything to do with UFOs.

Such is the state of popular ufology. Factual data are irrelevant.

On a more positive note, reaction from media was interesting. Many reporters across Canada recognized the significance of the results, and requested interviews. The most responsible reporting was by CTV News, which ran three different versions of its story on the 2012 Survey, all of which were fair and balanced. CBC almost had a major story, but a breaking political scandal the same day as the UFO story was scheduled to run effectively killed national coverage on that network. 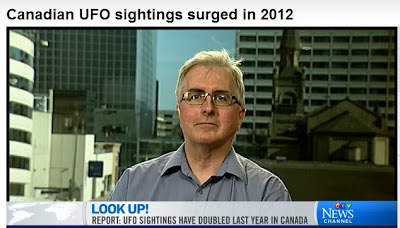 This is an important result especially given the “sour grapes” attitude of coverage of the Citizens’ Hearings on Disclosure, which was lauded by organizers and participants as the most significant news story of the decade, but was upstaged completely by the IRS scandal. It is interesting that in both the USA and Canada that politics took precedence over UFOs. (And yes, some have already played the “conspiracy card.”)

The media that covered the 2012 Canadian UFO Survey had some very good questions based on the findings, and that has led to some follow-up comments that add some background and insight into the nature of UFO investigation and ufology.

Question #1: “So all these UFO sightings are likely all just from people making things up or hallucinating, aren’t they?”

Answer: No, not at all. The reason is because we can actually explain many of the sightings or are able to suggest possible explanations for what was observed. In other words, there really were objects in the sky that led people to report seeing them.

Question #2: “Is there any consistency or common denominator to the sightings?”

Answer: Yes. That’s something the survey was able to find. We were able to determine that most reports were of orange or white lights in the sky, seen at about 10:00 or 11:00 pm, and usually seen by more than one person at a time. With these clues, we were able to show that many of these were Chinese lanterns or aircraft.

Question #3: “Was there any consistency to the unexplained cases?”

Answer: Not really. What was most noticeable was that the high-quality unknowns were definitely out of the ordinary. Flying octagons, objects shaped like “guitar picks,” a “dradle” and some that changed shape while in flight. It’s these characteristics that helped classify them as unknown. 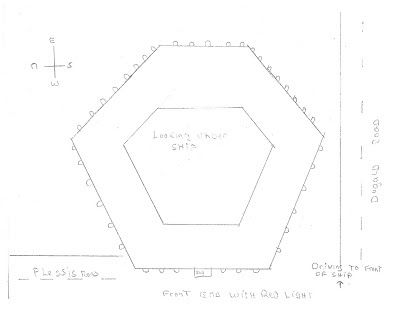 A hexagonal UFO reported in 2012

Question #4: “So doesn’t that speak to the probability that we’re not dealing with alien spacecraft? Because all the unknowns were different, and if we were really being visited by aliens, all their ships would look the same?”

Answer: Now that’s a really good question and observation. It’s based on our own limited experience with space travel. Yes, the Space Shuttles all looked the same, and even the SpaceX planes and “pumpkin seed” crafts have the same basic design. And the LEMs that landed on the Moon all were identical. Therefore, an alien scout craft or landing craft designed to descend to Earth should look the same. However, some ufologists have already pointed out that Volkswagen Beetles, snowplows and Mack Trucks are all very different, yet all function on land. It’s not out of the question that visiting aliens would have the same crafts, but there could be variations. This also assumes that there’s only one visiting alien species. If there are several alien races visiting Earth (or 57, as Clifford Stone insists), then the variance in the appearance of UFOs is easily explainable. 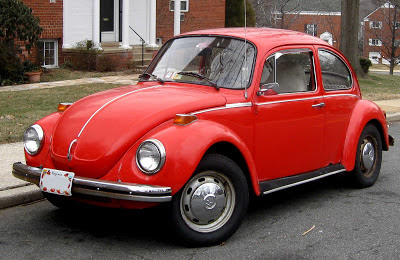 As we all know, the Volswagen Beetle was reverse engineered from UFOs. http://www.youtube.com/watch?v=I7cHPBlmVjg

Question #5: “So the Survey proves aliens are visiting Earth?”

Answer: Nothing of the sort. In fact, the answer to Question #4 was complete speculation. What the Survey shows is that thousands of people are reporting UFO sightings each year, and that the number of reports is increasing. Even the unexplained cases do not prove that aliens are visiting Earth.

Answer: The survey is a comprehensive study of what people (specifically Canadians) are seeing and reporting as UFOs. This data is the foundation upon which all the speculation about alien races, crash/retrievals, alien abductions, UFO propulsion and “disclosure” is based. If this data is problematic, then the various discussions about the other related subjects have no bases in reality. Furthermore, this data (and similar data gathering efforts in other countries) serves to quantify information about UFOs so that useful discussions within and with the scientific community can be held. Studies such as the Survey can be used to liaise with serious researchers in an attempt to better understand the UFO phenomenon.

Answer: Semantics is everything. By definition, UFOs are real because people report seeing unidentified flying objects. UFOs are real because military documents labeled “UFO Report” and describing observations of UFOs exist in significant numbers (e.g. the MoD files released by Britain or those similar files available in the Canadian National Archives). 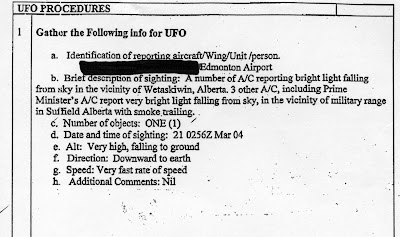 An official document showing that the government uses "UFO" as a term.

[This is, essentially, the “Santa Claus” defence as laid out so well in the classic movie “Miracle on 34th Street.” Santa Claus is real because the US Post Office, a government body, delivers mail to him.] 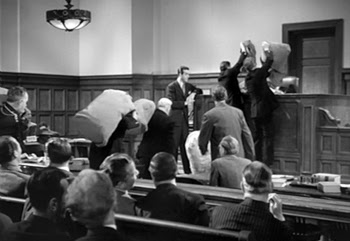 Santa Claus, too, is real, since he gets mail delivered by an official government institution

Question #8: “Okay, then, are some reported UFOs alien spaceships?”

Answer: I have no idea. Most aren’t. The remaining few percent don’t prove anything of the sort. What they do suggest is that if there isn’t a physical UFO phenomenon, there is at the very least a psychological or sociological one, and in any case it should be studied more by science. There’s certainly enough data.

Question #9: "Then why are more people reporting UFOs?"

Answer: Because they're there. I also think that more people are noticing things in the sky more often, and because they haven't been doing that in previous years, for whatever reason, they're thinking that they're looking at unexplainable objects. The Chris Hadfield Phenomenon has made more people aware of what's going on above their heads, as has Russian bolides and news about drones.

Question #10: "What's the one thing that media should note about UFOs?"

Answer: UFOs have not gone away. They're not a fad. Some factors are driving the phenomenon, and it's worth taking seriously.

Comments:
Hello Chris, don't be disheartened by the lack of an immediate response. It appears to me that the interest is as unpredictable as the subject matter; we have waves and periods of quiet.

It's entirely possible that next week or next year, your efforts will gain the attention they deserve. Even now, some journalist could be writing an article.

Studying UFO reports is so predominantly retrospective that the content of surveys like yours will gain value later on.

By and large, I like to imagine that the function of folk like me is to let folk like you know that people are reading and appreciate what you do. We're like a cough in the darkened auditorium letting the players know a crowd is really out there.

Thanks, Kandinsky. I'm not disheartened. I've been at this long enough to know how it all goes down. :) Thanks for the nod!