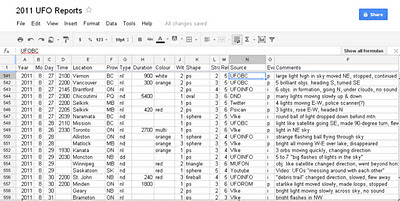 Comments:
Looks like you have your work cut out for you, going through all the different sources of UFO reports... I just wanted to make you aware of one new source: http://www.sightingsreport.com - we had a couple of reports added from the Toronto area in September, if you want to check the out. The website is new and we're just dipping our toes in the water, but it will hopefully quickly become a useful resource for reports and research.

Good for you. I will add you to my list. It's good you are encouraging actual investigation, too, which is something that is practically a lost art.