So why the secrecy about UFOs? Official Canadian docs give answers

One of the big buzzwords in ufology these days is "Disclosure," with a capital "D." It's something that in my opinion, by the current definition, certainly won't happen, but many UFO buffs are persistent in their belief that the "Government" (with a capital "G") will release all of its UFO-related secrets due to public pressure and lobbying by exopolitics types.

First, public pressure doesn't matter in this regard. Since we don't know what exactly is being withheld by the US government, they don't need to say anything about it. (Assuming there is something there.)

Second, if there's something really juicy, it'll continue being withheld. We still don't know anything about Black Projects that the US Congress approves every year to the tune of billions of dollars.

Third, we've seen what has been released already by the USA (e.g. Blue Book) and many other countries, most recently in another batch put online by the MoD in Britain. And it's mostly junk. A few cases of note, but nothing really interesting.
We already have thousands of pages of official UFO docs accessible by anyone who wants them, so the amount of material awaiting "Disclosure" is comparatively small.

Case in point: Canada. In my last post, I reported on Isaac Koi's discovery of how to access thousands of Canadian UFO docs in one fell swoop. Several down people have been grabbing them and sifting through them for something - anything - of interest. Since we had access to most of these docs already in paper format through personal visits to the National Archives in Ottawa, we knew what to expect. Lots of correspondence between departments and with members of the public asking for info on UFOs, with the usual standard responses.

I find the docs curious for several reasons. The contents of a consecutively-numbered small batch of files sometimes contains cases and correspondence from non-consecutive years. One from 1952, then 1968, then 1964, etc. Why?

Also, there are examples where we have a memo describing a particular document supposedly attached, but no attachment.

The cases that we do find are fairly unspectacular; many fireballs and "bright lights with tails" crashing to the earth - which are also fireballs. But speaking of crashes, remember the Clan Lake case, where an object was seen to fall into a lake in the NWT in 1960? That generated about ten pages of docs, total. In addition, the RCAF and RCMP made a lacklustre attempt to retrieve the object over the course of a few years, then lost interest. But only two years later, in 1962, two separate well-witnessed crashes of objects into northern BC resulted in major recovery operations involving helicopters, ground searches, witness interrogations and a full-bore investigations with dozens of pages of documentation. A metal "nose cone" from something was even found and taken for analyses.

Among the docs about the 1962 cases was a memo from 11 August 1975 by Dr. Douglas of the Planetary Institute (presumably the Herzberg in Ottawa). He was offering direction on how to handle a request by Canadian ufologist Gregory Kanon who was looking for official UFO docs between 1947 and 1964. Apparently, they didn't want to give him anything, and justified their denial by noting:

All are of historical interest and have been marked accordingly.

Besides reports from the RCMP that require the written permission from that force for access, they contain letters from private individuals who requested confidentiality in making the information available to this department. They are therefore to be considered as containing PRIVILEGED information and not for release until 2000. (emphasis in original)

Not surprisingly, the letter from Kanon requesting the information does not accompany this memo.

Two things of note about this:

1. UFO reports are of historical interest. This could mean that they are of cultural significance and should be documented and preserved. Furthermore, such reports might well be part of our Canadian heritage and might be studied with funds from government sources, like other heritage topics.

2. The reasons UFO reports are not made public is because some are official RCMP documents, which makes sense, and because others are private correspondence from citizens who request anonymity, which also makes sense. Except for one thing: hardly anyone who reported a UFO to the NRC or RCMP actually requested anonymity in their letters or reports. The case files don't contain witnesses' comments to this effect. 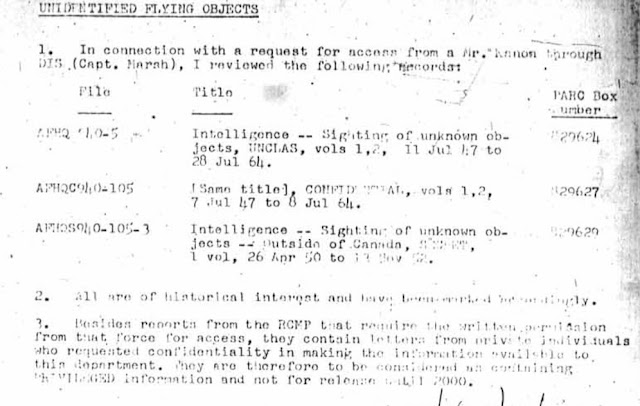