Going through the thousands of old Canadian UFO documents now available online (but not suddenly released through any "Disclosure," unlike what you may read on some sensationalist UFO websites), you can find some gems.

Most pages describe simple lights in the sky, and many are obviously stars and planets and meteors. But occasionally, you find some like this: 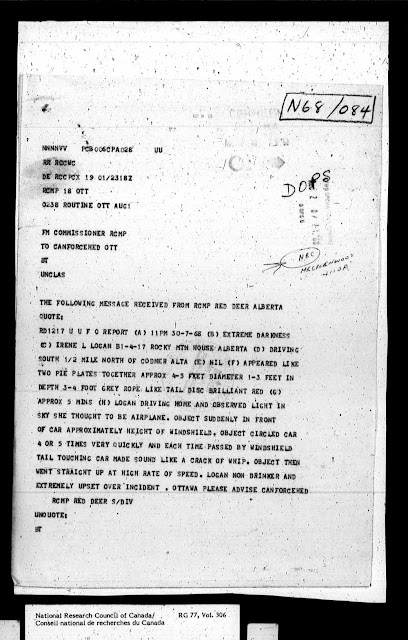 On July 30, 1968, while driving near Codner, Alberta, 51-year-old Irene Logan reported to the RCMP that at about 11:00 pm, she had seen a light in the sky that she thought was an airplane. Suddenly, the object zoomed up to her car and hovered in front of her car's windshield. It was a brilliant red in colour and looked like "two pie plates together," about four or five feet in diameter and about one to three feet from top to bottom. It also had a "3-4 feet grey rope-like tail."

That's not the weird part.

The object then "circled [the] car 4 or 5 times very quickly and each time passed by windshield, [its] tail touching car made sound like crack of whip."

The object then "went straight up at high rate of speed."


The recording officer then noted: "Logan non-drinker and extremely upset over incident." Which is likely an understatement.

The report was sent to the Commissioner's office of the RCMP by the Red Deer RCMP office, with the note: "Ottawa, Please Advise CANFORCEHED."

Apparently, the RCMP Commissioner's Office did just that, because the teletype online is from "Commissioner RCMP" to "CANFORCEHED OTT."

And that's it. No additional documentation or investigation.

Why that is significant is that other cases in the files contain extensive documentation, often running many pages, but usually only when they have an explanation or are shown to be hoaxes.

But not this one.

Did they just assume that she was crazy?