Diligent researcher Isaac Koi has published on his blog some details about some unusual space debris that was found in northern Saskatchewan in 1968. It was the largest piece ever found to that date, and was definitely considered to have come from space. However, the Canadian military and government could not definitively explain what it was from. 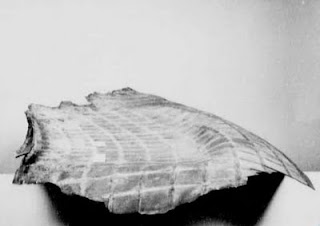 Koi got the docs and photos from a collection of UFO-related material held by the Canadian National Archives and made available online.

I have noted before that this is not "Disclosure" because the Canadian government has been making UFO docs available for decades at the Archives in Ottawa. It's only recently that they scanned several thousand docs and put them online.
http://www.abovetopsecret.com/forum/thread736264/pg1
http://www.ufoupdateslist.com/2011/aug/m16-001.shtml

Anyway, I replied to Koi in Errol Bruce-Knapp's UFO Updates and noted the found space debris was one of a number of known, documented crashes of objects in Canada.
http://www.ufoupdateslist.com/2011/aug/m16-006.shtml

March 15, 1960
A U-2 spy plane made a forced landing on Wapawekka Lake in northern Saskatchewan.
http://www.mysteriesofcanada.com/Saskatchewan/u2_drops_in.htm
Few people know that there was another U-2 incident other than that of Francis Gary Powers. It's a good thing that Flin Flon was more friendly than Russia. As far as we know, no one saw the U-2 make the emergency landing in Saskatchewan, which might have resulted in a UFO report.

June 22, 1960
An object is seen to fall into Clan Lake, Northwest Territories.
http://uforum.blogspot.com/2010_01_01_archive.html
The RCMP officer who met the witness recalled in 2010 that he was a reliable and trustworthy individual, not prone to exaggeration and well-liked in the community. If it was a meteorite under the water of significant size, you'd think the scientists would want to recover it.

October 4, 1967
A bright object was seen by several witnesses to fall into Shag Harbour, off the coast of Nova Scotia.
http://www.abovetopsecret.com/forum/thread736264/pg1#pid11980698
Called "Canada's Roswell," it's actually a bit better because we have official docs that something really happened, unlike Roswell.

October 17, 1968
Fragments of a "space vehicle" found near Wollaston Lake in Saskatchewan are received by the NRC.
http://www.abovetopsecret.com/forum/thread736264/pg1
Koi notes that this chunk of metal was the largest such debris found to that date, and yet it still didn't make it into any list of known space debris recoveries.

January 24, 1978
Cosmos 954 crashes into northern Canada, mostly near Great Slave Lake in the Northwest Territories but also, of course, Saskatchewan.
http://sciradioactive.com/Taylors_Nuke_Site/Operation_Morning_Light.html
This radioactive Russian spacecraft was seen to fragment and fall over a very wide area in the largely uninhabited Canadian north. Still, radioactive debris was painstakingly tracked, located and taken to the Whiteshell Nuclear Research Establishment in Pinawa, Manitoba, for examination. Aboriginal people throughout the area were given medical examinations and tested for radioactive contamination.

The significance of the above events is that each has official documentation and was investigated by authorities. The U-2 was technically not a crash or a UFO incident, but it's interesting it took place in a region where other events are now know to have occurred. Largely uninhabited, what else might have happened in the Canadian north that is yet to be discovered?