This past July long weekend spawned several new UFO reports. I came back from the SF convention to a plethora of emails, phone messages and even a fax, all about sightings across the country during the past week or two.

For the ones from the July 1st long weekend, it's tempting just to write them off as fireworks and vacation-related activity, but not all seem to be so easily dismissed.

Let's start with some paranoia. The sighting was on June 23 in Ottawa at about 9:20 pm. The witness wrote: "This email does not contain my real name because I don't want a visit by the men in black." Okay, then, "Not James Kelly," I won't mention who sent me the email. Anyway, he saw a triangular formation of three dim red lights that approached his home and remained stationary nearby for five minutes, then vanished.

The next night, two witnesses were at Falcon Lake, Manitoba, at 1:30 am and watched as a small "orb" about 8 to 10 inches in diameter flew past their window through the gap between two trailers. "It flew from the road into the bush behind the trailer."

But now the long weekend activity:

July 1, 2011 9:50 pm Dunnville, ON
A bright orange ball of light traveled faster than an airplane as it "overrode the brilliant stars" three times throughout the evening as a family watched from around their campfire. (UFOINFO)

July 1, 2011 10:25 pm Hanover, ON
Three witnesses watched a "crazy light," shaped like a teardrop, rise silently straight up to an altitude of "approximately 1800 feet" then moved slowly from east to west, stopping in midair several times. It changed directions 90 degrees and headed north for a few seconds, then "shot straight up at incredible speed and disappeared." (UFOINFO) 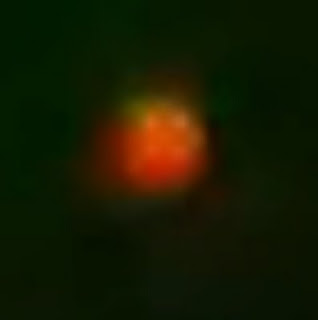 July 2, 2011 8:00 pm Port Dover, ON
A witness watched five orange, triangular objects flying towards the northwest at an estimated altitude of 2,500 feet. The UFOs were flying "in a manner that is not a characteristic of an aircraft" and "were accelerating and decelerating very quickly." The objects did not have any blinking lights. (UFOROM)

July 2, 2011 10:27 pm Brantford, ON
An off-duty Air Traffic Controller observed four objects "of no distinguishable shape, with round orange lights" flying over the city one at a time, then they "joined together" and flew off. The objects made no sound, were not detected on radar and were flying at an estimated altitude of 3,000 feet. (UFOROM)

July 3, 2011 1:00 am Ste. Anne, MB
Two witnesses were driving west and saw two lights "bigger than a TV set" hanging in the sky at an angular altitude of about 60 degrees. The lights were "moving up and down, bouncing around" and danced about the sky overhead and to the west. The witnesses stopped that car and got out and observed the UFOs for about five minutes, enough to see they were not balloons, aircraft, fireflies or satellites. They got back in the car and continued their journey. The lights moved off towards the south and became dimmer. After about half an hour, the witnesses "got tired of watching" and concentrated on driving home. (UFOROM)

At least for one of the above reports, I may have a simple explanation. The "crazy light" seen at Hanover was almost certainly a Chinese lantern. Any of the other UFOs described as orange lights could be lanterns as well, though the flying characteristics may rule that explanation out in some cases.