At the SF Convention

I just got back from Minneapolis, where I took in ConVergence, a large SF convention.

Here's an overall shot of the main staging area, with consuites along the back. 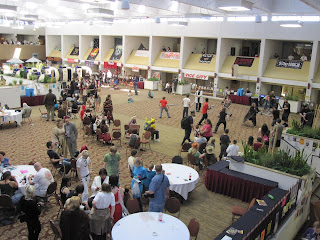 These guys were on a break from screening some movies: 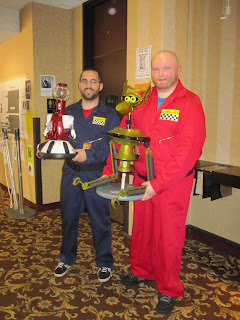 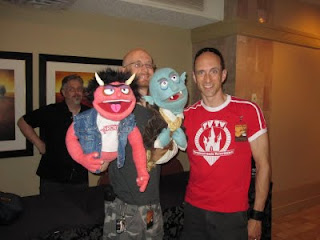 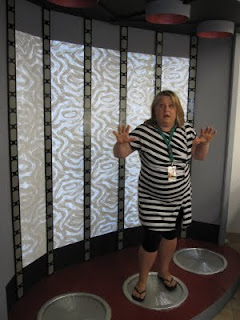 Batleth battles for the young at heart. 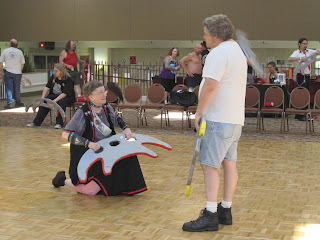 Admittedly, it has been a while since I've attended a large con, although we do go to KeyCon every year, just to see. (And I'm occasionally invited to speak, like this year, when I was on several KeyCon panels about UFOs and astronomy and other gee-whiz stuff, including one with Scott Young of the Manitoba Planetarium, on SETI.) 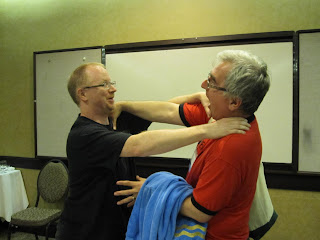 Cons haven't changed much, although I'm now one of the older fans. (Not quite First Fandom, but close enough, if I measure the looks from the under-20 crowd correctly.) The movie room is still a good place to hang out, and the Anime room was generally busy too. Made it to a few con suites and chatted with a few fans there. The dealer room was smaller than I expected, and filled mostly with Steampunk clothing booths. That genre is really, REALLY in these days: corsets for the women and top hats and pith helmets for the men.

One reason we went is that there were three panels about Fortean phenomena and paranormal stuff. As well, there were several panels and talks about pulps, including one by Anthony Tollin, who is reprinting the Doc Savage pulps (among others). Great guy, and a wealth of knowledge. (I collect the Doc Savage series.) 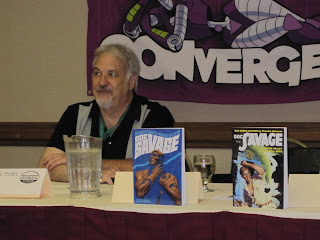 As for the paranormal panels. The first one we went to was cancelled because the presenter had a death in the family. The second one was weird because the presenter was a no-show, and the audience waited until ten minutes past, when I stood up and said, "So since he's a no-show, I investigate UFO sightings and have written some books. Who wants to hear some of my stories?" everyone did, so I started speaking and regaled the group with the Michalak case and others. They seemed to dig it. I've been asked to submit a proposal to be actually on the speakers' list next year.

The other paranormal panel was by a member of the Ghost Hunters TV show team. Despite the rep that such shows have, Britt Griffith insisted that the show is unbiased and explains most cases without invoking paranormal explanations. The audience spent a lot of time sharing their own experiences with poltergeists and "harmonic vibrations," as well as stories of "packs of ghost dogs" and communication with deceased relatives.

For me, though, the highlight of ConVergence was a screening of My Sucky Teen Romance, a feature vampire film by young filmmaker Emily Hagins. It was partially shot at last year's ConVergence; it was an unabashedly cashing-in-on-the-teen-vampire-thing sendup about a girl who gets bitten by a vampire at an SF convention. (Where vampires can blend it with crowds the best.)

It may have been cheesy, but I thought it was amazing for a teenage filmmaker with a passion for the art.

The other thing I should note is that between Winnipeg and Minneapolis, you drive past four Space Aliens Grill and Bar franchises. Best pulled pork dishes anywhere. Just sayin.'