Yes, we made it back, and with stories to tell. Once again, we decided to go on a "Fortean Tour" for our vacation this year. After much web browsing, book scouring and pamphlet poring, we set out on our trip into the American midwest.

Out east from Winnipeg on a morning threatening rain, but nothing manifested. We passed through Falcon Lake, the site of the classic 1967 UFO landing; you can take a horseback "UFO Tour" to the landing site, guided by someone from the Falcon Lake stables. And t-shirts commemorating the event can be bought in the town's grocery. Having been there several times, this was not on our agenda, however.
We took the north bypass around Kenora, where we were almost immediately wiped out by a semi that was passing a slow-moving car by driving in our lane of oncoming traffic! I had to veer onto the shoulder to avoid collision. The Trans-Canada in Northwestern Ontario is definitely as dangerous as its reputation has it!
We turned south from Kenora towards Sioux Narrows, passing some gorgeous lakes along the way as the two-lane road wound through forests. We passed Rushing River, one of my favourite
campsites, but continued south.
We stopped for a break in Sioux Narrows. It kind of reminded me of some place like Golden, BC, surrounded by high hills and nestled in a river valley. (Yes, I know there were no mountains! But the scenery was beautiful and the town has all the tourist trappings and souvenir stands that make it what it is.)
Back on the highway until we reached Fort Frances, ON, and International Falls, MN, a twin town that straddles the border. We can verify that as we were told, the area smells awful, the pulp mills brewing up some seriously noxious odours. The border crossing here is on a bridge. It was about a half-hour lineup to get through customs. Curiously, you can walk on a footbridge to go across for the day, commuting between the two towns being so easy and economical.
Once across, we quickly sped east to the Island View Lodge, a fishing resort that is frequented almost exclusively by those wanting to catch "the big one." I say "almost" because we were there to catch a glimpse of something else: the Island View ghost! 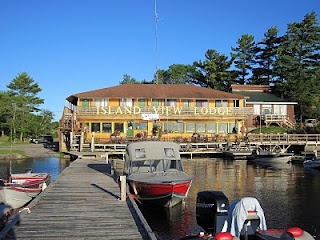 The story we heard was that the ghost of a former owner was haunting a cabin at the lodge. We didn't want to make any inquiries too early, else someone might deliberately give us our money's worth!

Fortunately, we were there for a vacation too, and took advantage of the gorgeous weather and our deck overlooking the lake to do some reading a enjoying the fresh air and scenery. The lodge has a restaurant overlooking the lake, so we went there for dinner and were pleasantly surprised to find it's fantastic! Donna had a duck with wild rice and I had prime rib with walleye fingers (didn't know they had fingers, did you?), and a bottle of champagne.

The dining room, overlooking the lake. 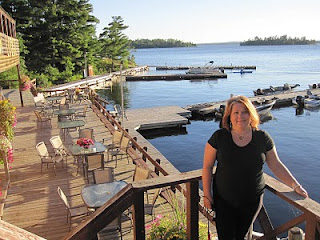 The Madame posing on the resort's deck. 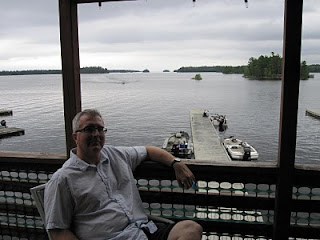 Me, being all relaxed and stuff.

After dinner, we asked our waitress about the ghost and she was very helpful. She brought out a clipping from Minnesota Moments magazine from 1993 in which stories of the ghost were recounted.

According to locals, the ghost is that of Bob Cole, the former owner who died many years ago. Ever since then, many people have had experiences with poltergeist-like effects. A long time ago, someone had been working on a truck's engine and had given up on it at last, because its parts were so corroded and rusted. Suddenly, all by itself, the motor one day started up and ran until the puzzled mechanic stopped it. Of course, the motor never ran again.
Many employees at the lodge have been victims of a playful ghost. Once, a bartender had been using a bottle opener very often one night, having to retrieve it every so often from a hook on a wall. At the end of the night, he couldn't find his keys to the cash register, so he said out loud, "Okay, Bob, help me find my keys!" Suddenly, he heard a jangling of keys behind him, There they were, on the hook behind the bottle opener!

We then began calling out for Bob to appear or give us a sign he was around, to no avail.
Only one person has seen the ghost. As we were staring to check out the next morning, we asked the lodge manager about the ghost. She said that she had seen it once, when she had forgotten something at the reception desk late at night, and rather than turning on the light she just carefully want downstairs. She was shocked to see a ghostly-white figure standing in the gift shop, hovering in the darkness. 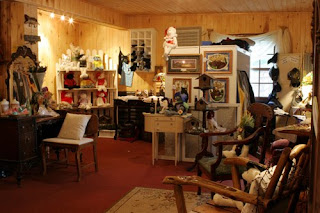 The Gift Shop, where the ghostly figure was seen by the manager.


The manager fled upstairs in a hurry. She also said that the odd phenomena seem to center on herself. She said that "things happen around me." She said that every time she walks into the bar, the blender turns on by itself!
Day One completed.