Did a UFO crash in Clan Lake?

It’s been 50 years since the RCMP investigated a report that something unusual fell into Clan Lake, 30 miles north of Yellowknife. Documents have been made available on the website of the National Archives of Canada that show the RCMP and RCAF were both curious about what happened on June 22, 1960.

The first of six official documents about the incident is available here:
http://www.collectionscanada.gc.ca/ufo/002029-1001-e.html 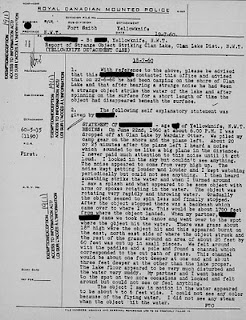 Witness testimony described an object that apparently fell from the sky just offshore. When it reached the water, it looked like a rotating object with “arms or spokes” splashing water in all directions.

When the area was investigated, a narrow channel had been formed in the reeds, but nothing was found underwater when probed with long pieces of wood.

National Defence said there had not been any space object tracked in the area and therefore it was not a piece of rocket or satellite. A scientist with the National Research Council of Canada believed the object was a meteorite that was very hot from entering the atmosphere and thus sent up a cloud of steam when it hit the lake. It was suggested that this steam would have been misinterpreted as an object with spokes and water being throw off. The witness’ testimony contradicts this explanation, however.

Here's the thing: meteorites are not always hot when they reach the ground. Furthermore, any meteorite large enough to cause such a big splash and create a channel in the lake bed would certainly have been of interest to the meteoriticists in the National Research Council. Yet the follow-up to the case just fizzled out.

Comments:
This is very similar to the case I recently mentioned over at Kevin Randle's blog -that is- the 10-12-47 "supposed" meteoric impact in Mexico.

Considering the size of the explosion, you would think that this case too would have generated a long term interest.

I hypothesize that it could only have beeh either an unknown metallic object, or an un-documented v-2 accident, similar to the May 29th incident.

Thanks for your blog, by the way.

Bob:
Your mention of V-2, made me remember the *U-2*, which may be relevant here. Not well-known is the fact that a U-2 crashed in northern Saskatchewan in 1960, only a few months before the Clan Lake incident. Yes, a U-2 crash in Canada, not the USSR! Here's a link to a note and photos about it:
http://www.lswilson.ca/u2.htm
Clan Lake is about 1000 miles from where the U-2 crashed, but still...

I'm a commercial diver named Cody. Has anyone dove this site yet? If no
why not?

Cody: No one has dived there to my knowledge. I think it's because no one knew about this until the file was discovered recently.