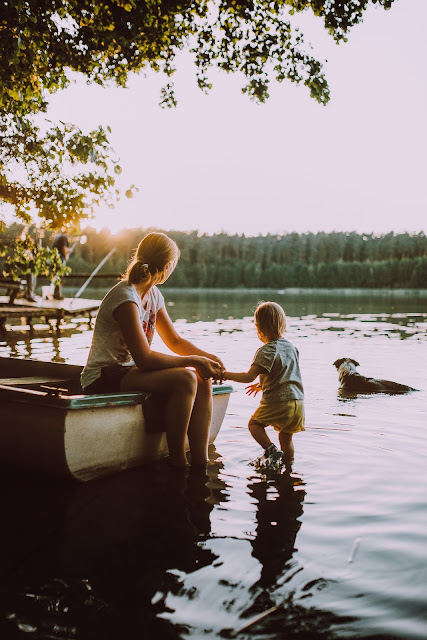 With the announcement of the new rechristened Pentagon UAP program as the “All-domain Anomaly Resolution Office (AARO),” there is apparent support for observations of UFOs or UAPs that seem to enter or exit bodies of water.

The Pentagon statement about the AARO notes specifically:

The US’s Department of Defence (DOD) has launched a new “all-domain anomaly resolution office” (AARO) – a rebrand and widening of its UFO investigations office which will now also assess reports of not just flying saucers but also “anomalous, unidentified space, airborne, submerged and transmedium objects.”

Now, these kinds of UFOs are not at all new in some ways, as there have always been reports of UFOs seen moving over lakes or oceans and dropping into them (rarely out of them). In most cases, these have been explained as bolides or meteors with apparent downward trajectories which are coincident with bodies of water. Sometimes, UFOs are seen at or near the surface of a lake or the ocean and then disappear, suggesting to an observer that the object descended into the water. Many “orb” reports from the south side of Lake Ontario looking north towards Toronto, for example, involve lights that are actually on aircraft landing at Billy Bishop Airport along the waterfront, or else on ships or boats.

Singling them out by calling these UFOs “transmedium” is a bit of a stretch, but this is certainly related to observations of UAP seen by US Navy personnel and reported widely on UFO fansites. Most notable of these is Jeremy Corbell’s documentation of a spherical UAP that seemed to enter the ocean off San Diego in 2019, recorded on video by sailors on the USS Omaha:

The US Navy photographed and filmed “spherical” shaped UFOs and advanced transmedium vehicles… This footage was filmed in the CIC (Combat Information Center) of the USS Omaha on July 15th 2019 in a warning area off San Diego. This footage depicts a UAP event series that reached a crescendo with one of the unknown targets entering the water. No wreckage found. None of the unknown craft were recovered.

Better-known is the encounter by pilots flying from the USS Princeton near the same area in 2004:

What the pilots saw as they came within about a mile of the target was a white, featureless object—no wings, engines, control surfaces, or surface features—that measured roughly 45 feet long and looked like a flying Tic Tac. Commander David ‘Sex’ Fravor, the commanding officer of VFA-41 and the pilot in the lead Super Hornet that day, noted that the outer shell of the craft looked like a ‘whiteboard.’ The object was low over the water which was frothing underneath. According to Fravor, it looked almost like the water was ‘boiling’ below the object, which was moving above the water ‘like a Harrier.’ It then started moving at about 500 knots at 500 to 1,000 feet over the ocean.

But apart from these few military reports, transmedium UFOs are relatively rare in the literature, despite some very thorough publications devoted to documenting water-related UFO cases. [Most notably, this includes Carl Feindt’s remarkable UFOs and Water: Physical Effects of UFOs on Water Through Accounts by Eyewitnesses (2016). https://www.amazon.ca/UFOs-Water-Physical-Accounts-Eyewitnesses-dp-1483441474/dp/1483441474]

It’s tempting to think (as some have suggested) that the inclusion of the actual term transmedium as a specific kind of UFO is related to the influence of some UAP political insiders and not a reflection of significant numbers of Unidentified Underwater Phenomena (UUP) reports. There are some claims that UUP have been detected by military sensors and submariners, which shouldn’t come as any surprise given the many possible objects detectable on sonar and other devices. A small percentage of UUP—like UFOs—will be unexplained.

The other interesting thing to note about the AARO inclusion of “watery” UFOs in its mandate is that, as with airborne or spaceborne UAPs, it’s primarily interested in military reports. As yet, we have not seen any plan for AARO (or even its predecessor AATIP) to collect civilian UFO reports. That still seems to be left to civilian groups and organizations.

Further, the Pentagon seems to be encouraging military personnel to come forward without fear of reprimand or ridicule, with a kind of whistleblower policy being instituted. This is a good thing.

Of note, however, is that there is already a system in place for mariners and military ship personnel to report UAP.

There is currently on the books a regulation as part of the Canadian Coast Guard’s Notices to Mariners that mandates a procedure for reporting “Vital Intelligence Sightings” to military authorities. This is in parallel with Communications Instructions for Reporting Vital Intelligence Sightings (CIRVIS) that is part of the procedure manual for Canadian aviators and is also in force for American air personnel.

Merchant Intelligence (MERINT) reports are required by the Department of National Defence to “extend the early warning coverage for the defence of the North American continent… during peacetime.”

MERINT reports should be made under the following circumstances:

(a)   Immediately upon a vital intelligence sighting

And what falls under the category of a vital intelligence sighting?

All airborne and waterborne objects which appear to be hostile, suspicious or unidentified should be reported.

(a) The following are examples:

(iv) Surface warship positively identified as not Canadian or U.S.

(v) Aircraft or contrails (vapour trails made by high flying aircraft) which appear to be directed against Canada, the U.S., their territories or possessions.

Okay, so (i) is a no-brainer. Report any guided missile that’s zooming overhead. Gotcha.

And if you’re fishing from your houseboat and a gunship with a with an unusual flag comes alongside or a submarine surfaces next to you, that falls under (iii) or (iv).

But it’s number (ii) that’s interesting. It specifically refers to UFOs (and not UAPs, sorry – not sorry).

The Canadian Department of National Defence requires all mariners and boaters to keep an eye out for UFOs and tell the Coast Guard about them:

MERINT messages should be transmitted to the nearest or most convenient Canadian or U.S. Government coast station.

In the event a report cannot be made by radio, the master should report the details of the MERINT sighting to the appropriate Canadian or U.S. consular or military authority immediately upon arrival in port. Such reports should be made by the quickest available means.

Note that this isn’t just a Coast Guard thing. The MERINT regulations mention consular or military authorities as well. And not just Canadian authorities, but American offices as well. 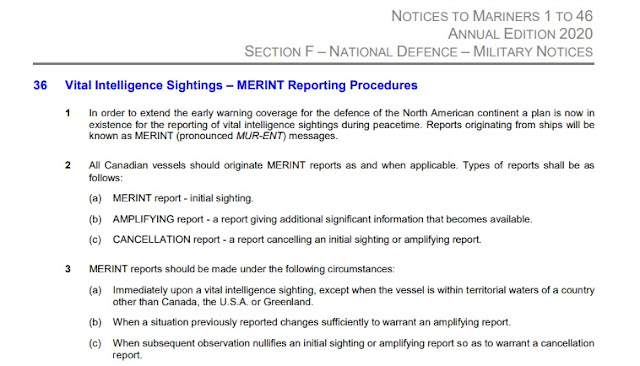 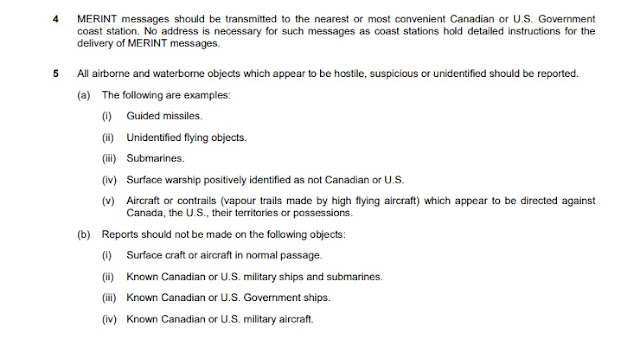 As of 2020, the most recent Notices to Mariners, the Canadian government is cooperating with American military offices to allow both civilian and enlisted personnel to report UFOs. This has not been mentioned in any of the recent Pentagon statements about UAP.

As I’ve recommended many times before, you should look to Canada for UFO research and report data.