There's a new Angus Reid Poll that looks at "Stranger Things," according to its website. It covered UFOs, ghosts, psychic phenomena, Sasquatch and lake monsters.

80% of Canadians believe ET exists in the universe.Twice as many women as men believe in psychic phenomena.43% of Canadians say there is a UFO cover-up.And most importantly, Manitobans are the most skeptical in the entire country.
(Yay me.)

Some of the detailed findings:


The vast majority of Canadians (79 per cent) say it is either definitely (29 per cent) or probably (50 per cent) true that intelligent life exists elsewhere in the universe. 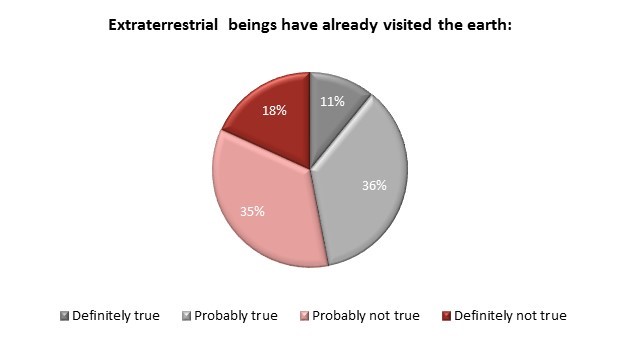 Angus Reid interpreted this as the majority of Canadians (53 per cent) don’t believe aliens have visited Earth.

In an election, the majority would win. In this poll, the error bar was plus or minus 2.5 per cent. In other words, it’s really quite close to half and half.

The gender unbalance has been noted before in several studies, but it is really quite strong in this case.

When it comes to paranormal phenomena such as ghosts, communication with the dead, and psychic powers, women are about twice as likely men to believe such things are possible.

For belief in aliens, however, the gender disparity almost vanishes: 48 per cent men and 46 per cent women. (Don’t ask about the missing six per cent.)

As for a UFO cover-up, 43 per cent of Canadians believe there is such a thing. The statement in question was: “The U.S. government has covered up the existence and presence of extraterrestrial life on Earth.”

A secondary statement was: “A secretive power elite with a globalist agenda is conspiring to rule the world through an authoritarian world government.” 33 per cent of Canadians believed this to be true.

The same set of questions also had the statement: “The Apollo moon landings were "staged" in a studio.” Fully 15 per cent of Canadians bought the idea.

And for American readers, how about: “Barack Obama is not a natural-born citizen of the United States and, therefore, is ineligible to serve as President.” 12 per cent agreed.

Going through the data, there are some other interesting findings.

Demographically, Manitobans are the most skeptical in almost every category. On the issue of cover-up, for example, 40 per cent of Manitobans believed, while 44 percent of Ontarians and 43 per cent of Quebecois believed. Other questions and statements had similar spreads.

The poll also found a correlation between pop culture and belief in UFOs:

As it turns out, another large indicator of a person’s propensity to believe earth has been visited is found when looking at their relationship with the iconic television show The X-Files. The correlation makes sense – believers may seek out a show that explores this issue, and non-believing viewers may be more inclined to ponder the question after watching.

...seven-in-ten (71%) hardcore fans report that the belief that aliens have visited earth, roughly double the number among people who are unfamiliar with the show.

I'm not sure how certain really could be. The poll also found that among people who "Didn't Know Anything" about the X-Files TV show, belief still ranked at 34 per cent. (Yes, there are such people! 13 per cent of all Canadians, according to the poll!)

But I don’t see the correlation in what was actually in the poll. The respondents were asked: “Would you say people who are fans of the show are generally more or less likely than non-fans to believe in such phenomena?”

Which is a bit different.

As for other paranormal phenomena, 47 per cent of women and 24 per cent of men believe it is possible to communicate with the dead.

Finally, the poll revealed a significant belief that science was not all it's cracked up to be.

When asked to respond to the statement: “There are things that happen on Earth that cannot be explained by science,” an amazing 77 per cent said  it was “Definitely” or “Probably” true. 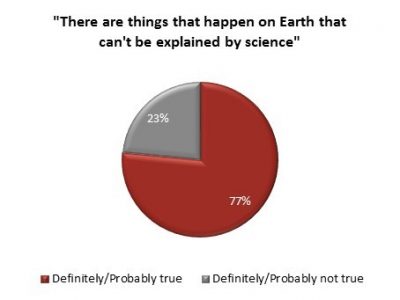 Neil de Grasse Tyson certainly has his work cut out for him.