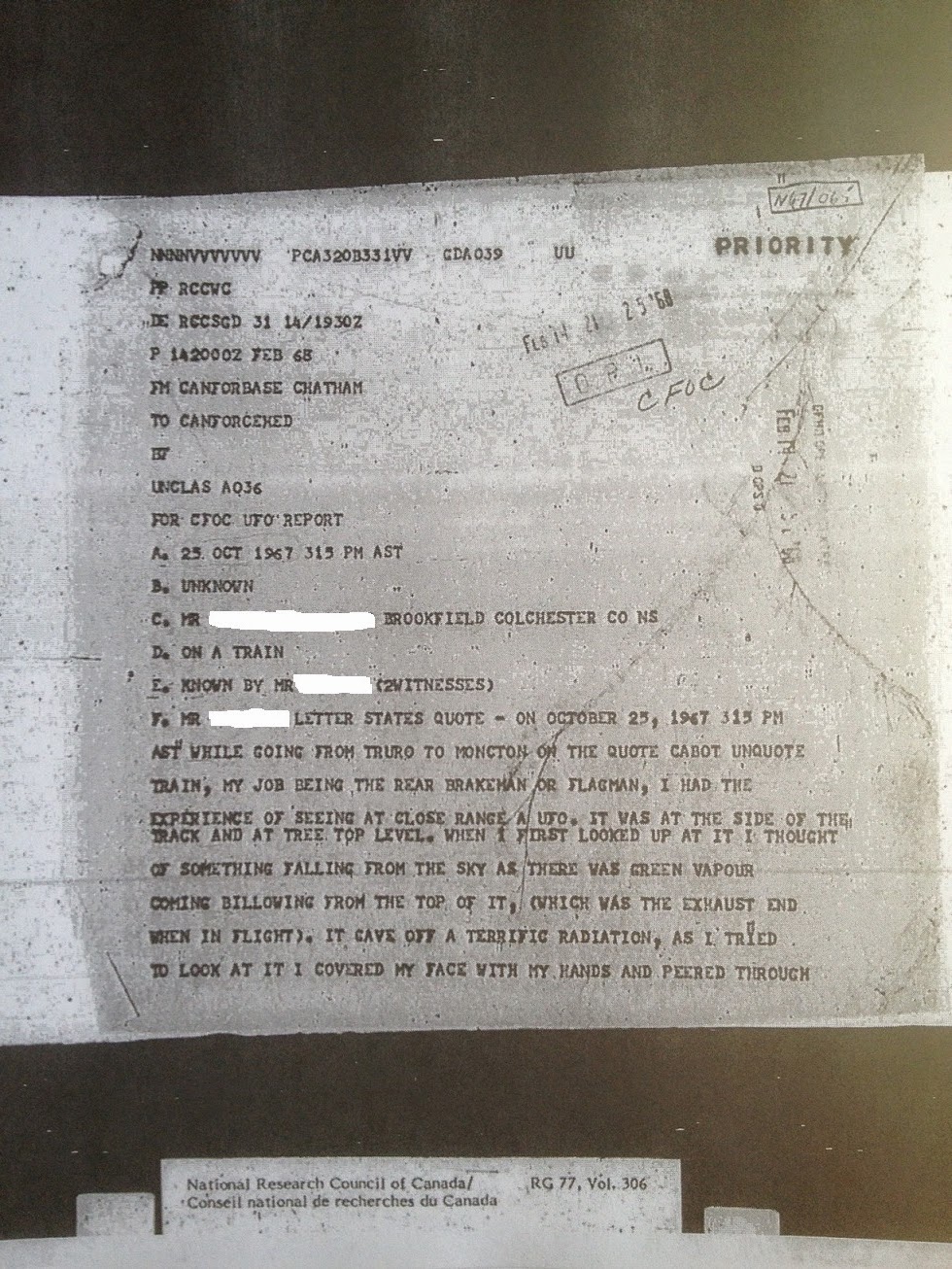 Earthquakes, UFOs, and all that stuff


Some new research has been published in a scientific journal about the relationship between UFOs and earthquakes. Ostensibly, however, the research is about luminous objects called earthquake lights are observed at or around the time of significant seismic events.  The paper is available at:

This is significantly different in scope from the Tectonic Strain Theory of UFOs, proposed many years ago by Michael Persinger, a Canadaian neuroscientist who believes that most UFO reports can be explained as energy releases from tiny seismic events deep underground. (He's also the guy who says UFO abduction experiences can be explained by electromagnetic effects on the temporal lobe in the brain.)

Anyway, I had originally thought this made some sense, until I began studying the data and the evidence to support the theory, in detail. In short, I found it lacking. I prepared a long treatise on why this was so, in my opinion. It's available online at:

Supporters of the TST didn't take kindly to my criticisms, so a bit of a heated exchange erupted in scientific journals regarding whether UFOs really could be explained as energy from seismicity. (This was actually quite significant: to debate a theory of UFOs in a recognized scientific journal!)

Curiously, I was the only critic of the theory among all of ufology. Practically everyone else seemed to think it made perfect sense, apparently.

The TST theory continued to chug along, and I continued to voice concerns, until it seemed to have reached its peak... or nadir. Proponents claimed that UFO investigators were at risk of dying of cancer because the energy released by the seismic events - which are what were reported by witnesses as UFOs - would cause the cancerous cells to multiply in people frequenting UFO hotspots. And those, of course, would be UFO investigators.

A medical researcher found this as absurd as I did, and we published a note about this in a major medical journal.

So, are UFO sightings and earthquakes related?

You be the judge.


Noted ufologist Ann Druffel published an article all the way back in 1987, making recommendations on how to deal with UFO abductees.

At the time, alien abduction research was still in its infancy, so her suggestions and her classification of UFO abductees (and contactees) is interesting reading for those wishing to "support" people who are now known as "UFO experiencers."

In short, she found that only two of the six classifications of UFO abductees would benefit from support groups, and that ufologists working with most abductees would have a lot of difficulty. She also spoke out very strongly on having clinical professionals such as psychologists and medical doctors (including psychiatrists) help evaluate and treat abductees for their "emotional damage" caused by either the trauma of their experiences themselves or by the consequences of their coming forward with their stories. In many cases, Druffel noted, abductees/contactees have histories of neuroses, relationship issues, social problems and poor work histories.

And yet, here we are, more than 25 years later, and abductee "support groups" are continuing to chug along, often without adequate medical support for people with emotional trauma. 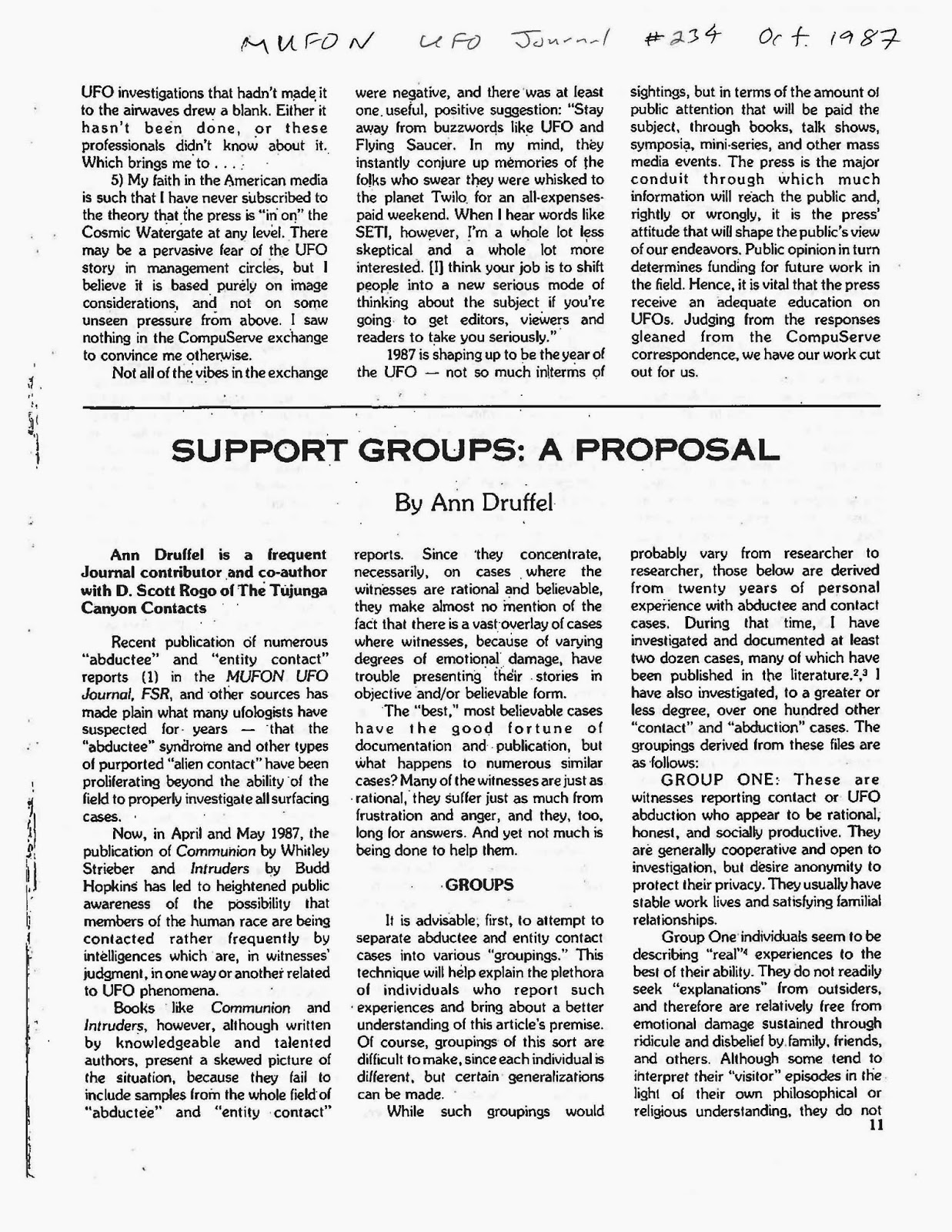 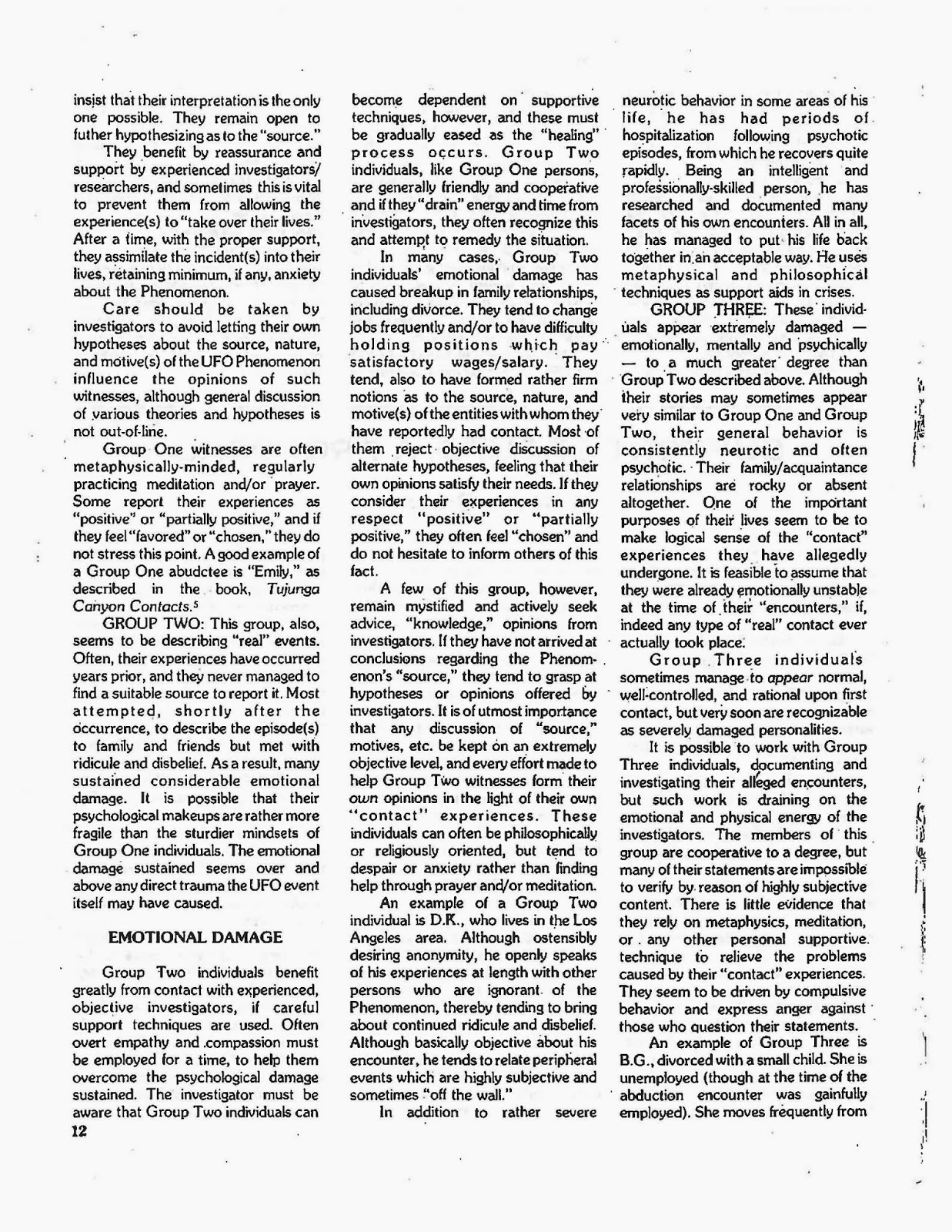 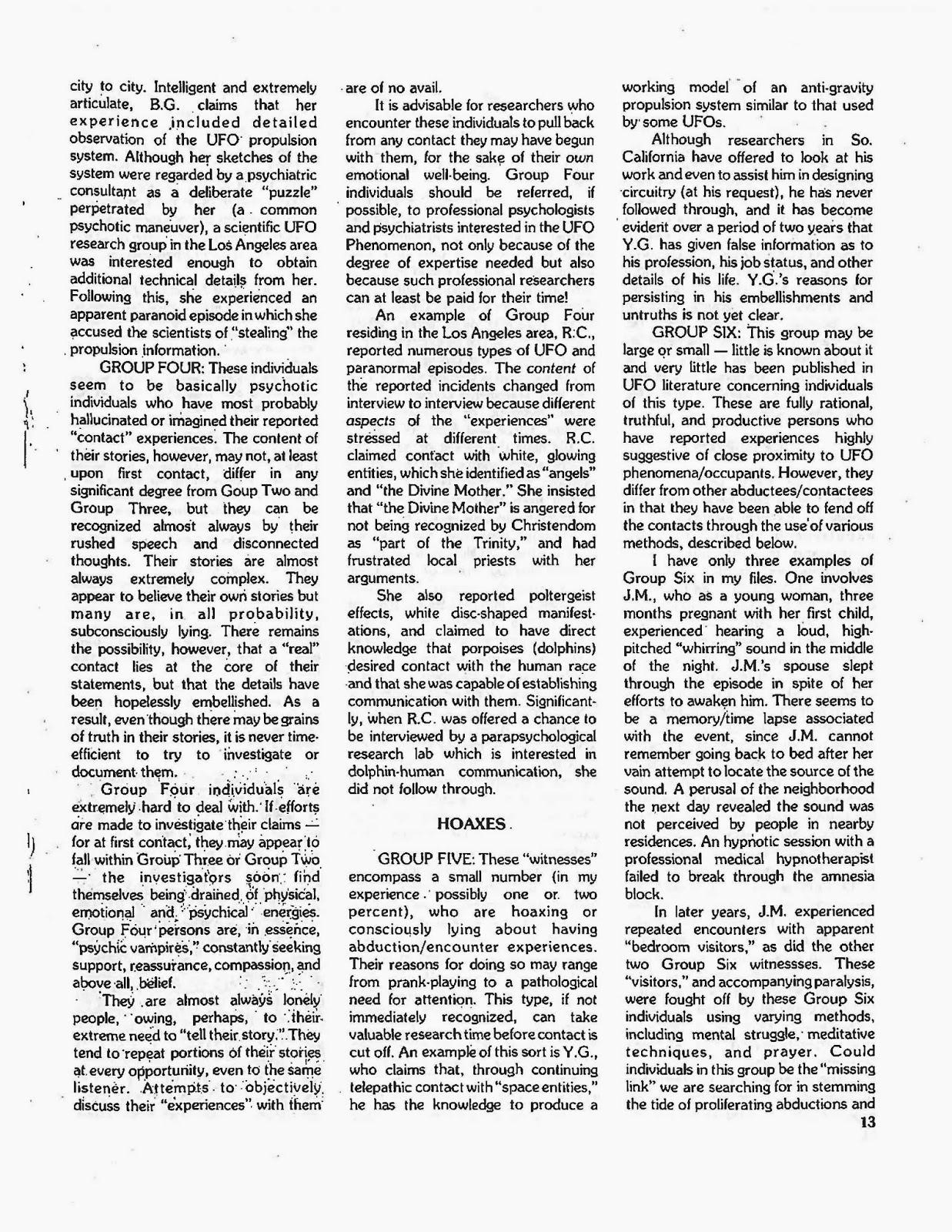 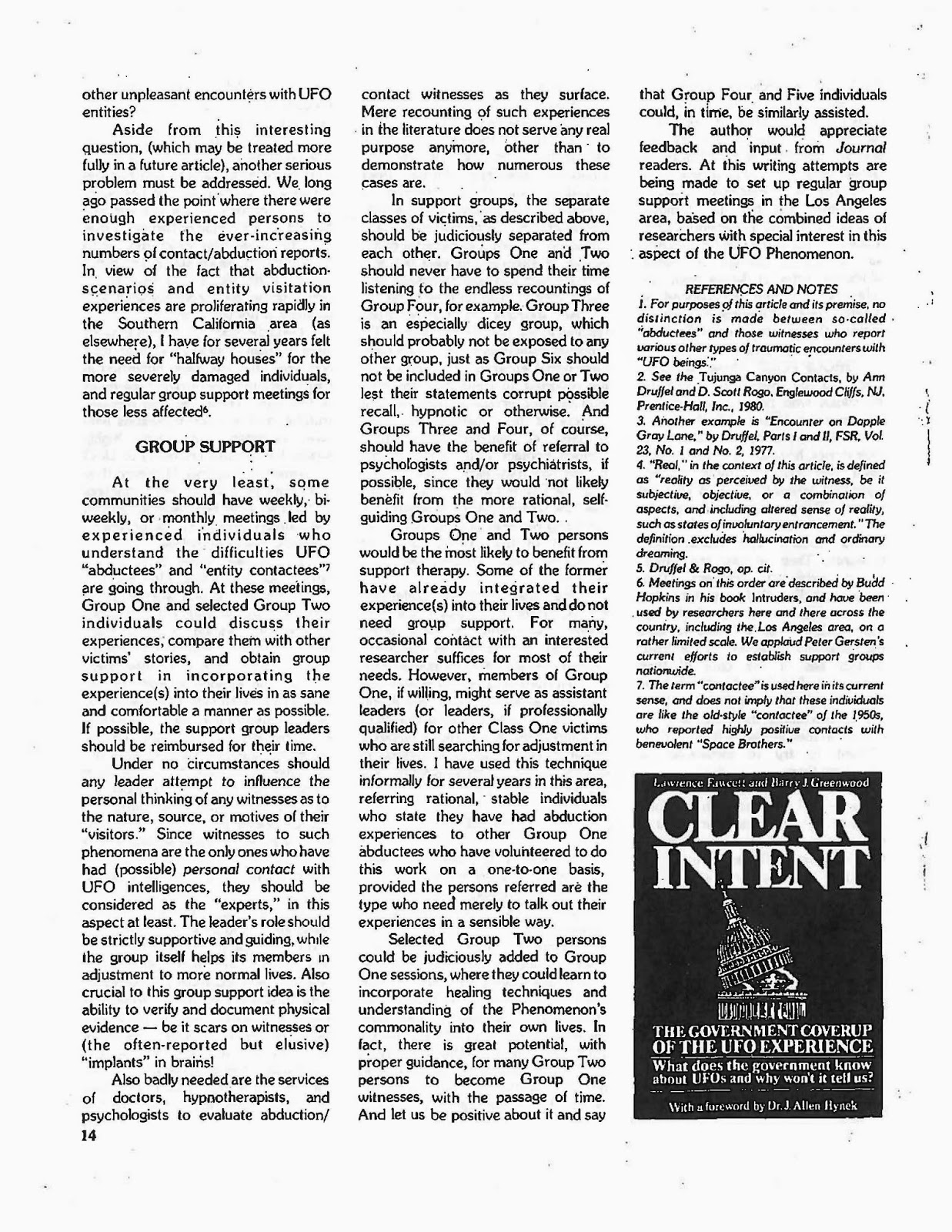 Recent comments about UFOs and the state of ufology


A talk I gave at Dream Big, the day before Neil deGrasse Tyson gave his presentation. I spoke about the state of Canadian ufology, and in particular, what people in Canada really are seeing and reporting.

And the review of the talk:

And as well, I was a guest on the Paracast recently:

And the ensuing discussion:

It didn't take long for the Conspiracy Theorists and Disclosure Proponents (CT&DPs) to jump on the recent comments by Bill Clinton in response to questions from Jimmy Kimmel about UFOs.

First salient point: He's not saying anything he hasn't said before.

Second point: He said there were no aliens at Roswell. So, since CT&DPs insist politicians (even retired ones) lie about everything, there really must have been aliens there. (Corollary: Paul Hellyer, darling of CT&DPs, says aliens are definitely here, so being a retired politician too, he must be lying. And therefore aliens do not exist.)

Third point: Clinton stated a belief held by most astronomers and the public that aliens probably exist elsewhere in the universe. Which is nothing that you can't read about in any pop science publication.

In other words, there's no news here, people.