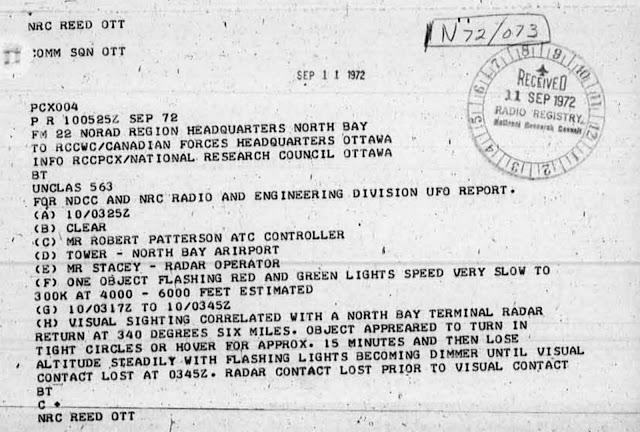 September 1, 2011 11:00 pm Neepawa, MB
While driving, the witnesses saw two bright orange lights in the southern sky. The lights remained visible for about 15 minutes as they traveled. (PSICAN)

September 7, 2011 11:30 pm Winnipeg, MB
A bright, slow-moving object with an orange light drifted slowly over the city. Photographs revealed the object to be a Chinese lantern. (UFOROM)

September 9, 2011 3:30 pm Toronto, ON
A jogger in Riverdale Park watched a round, silver object moving in the southeast sky. It flew south, stopped, then went west, then turned and went north. (UFOROM)

September 10, 2011 8:20 pm Maple Ridge, BC
Two witnesses observed three "strange orange lights." As they were being watched, the lights formed a triangle in the sky, then slowly faded from view. (Sightings)

September 11, 2011 8:00 pm Windsor, ON
A red, glowing object flew towards witnesses. It had a small white light just behind it. (Sightings)

September 14, 2011 6:00 am London, ON
A family was awakened by a loud screeching noise and accompanying vibration. They then saw two bright, multicoloured objects moving northeast across the sky before they were lost to sight. (Vike)

Starting September off with some UFO reports

A few cases to start the month:

September 3, 2011 9:40 pm Richmond Hill, ON
Orange balls of light in the sky approached from SE, changed direction and moved N. Looked like "balloons of fire." (Sightings)

September 4, 2011 8:50 pm Cambridge, ON
Orange object like plane "engulfed in fire" moving W to E in SW, thought to be 5,000 ft in altitude.Object changed course heading S and ascending. (MUFON)

September 4, 2011 10:00 pm Buffalo Point, MB
Stationary light in NE "moved strangely" but effectively remained low to horizon throughout night until 6 am next morning, when it disappeared "in a flash" in the S. [Jupiter?] (PSICAN & UFORUM) 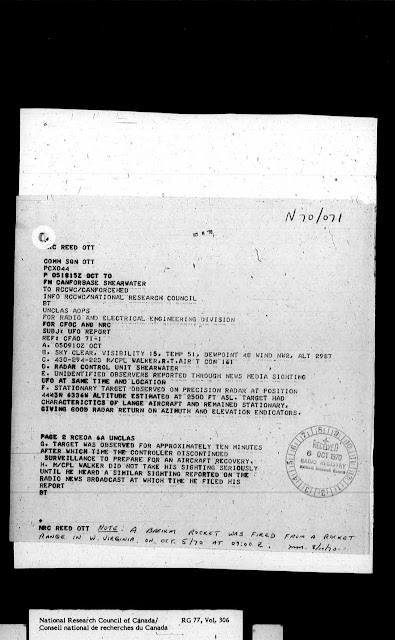