I received a report from Fort Nelson and thought I would post some details to see if anyone saw something similar.


two objects in the sky at about 1 o'clock.  Both objects were traveling in a south easterly direction and one object appeared to following or at the very least adjacent but slightly behind and to the side of the first object.  Both objects displayed a light in the evening sky.


The objects themselves appeared to be identical and at first I thought they were two helicopters flying but then at the speed they were traveling - it wasn't possible.  Both appeared to have a tail but that could have just been the light reflection or a light.  As they continued south east - they appeared to be about 1000 feet off of the ground and as I watched the last object (or at least the trailing object) simply disappeared.  The first object continued in a SE direction - at about the same height but was gone from my vision within a second or two.  It continued to be lit but was moving very quickly and it disappeared over the trees as I continued south.

There are a number of possibilities as explanations.It's possible they were high-flying aircraft (and only appeared to be 1,000 feet high). They might have been NOSS or Iridium satellites, which can travel in twos and threes and follow easterly courses. As for one disappearing, that is what happens when a satellite passes into Earth's shadow. If it wasn't an aircraft, a slight bank would have rendered it invisible. 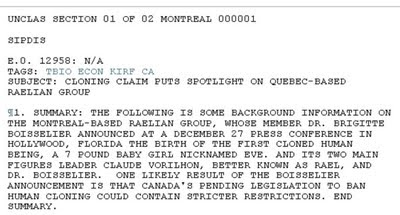 It's sad, but one online source for information about Canadian UFO reports has been shut down. That means that people curious about what is being reported in Canada won't be able to learn about what others have been seeing.

And, not surprisingly, I'm being blamed for it.

Today, Brian Vike, who has been posting reports sent to him on his Vike Report, posted a note that:

The Vike Factor receives a lot of Canadian UFO sighting reports throughout the year and every year as time goes by. I finally have had enough of one guy who has ticked me off. I won’t post any Canadian sighting reports.
http://canadaufo.blogspot.com/2011/04/abit-ticked-off-not-reporting-anymore.html

He went on to note:

Since every report gets tagged with the source of where the reports comes from, I get tagged with “an online source”. So had enough of this guy for sure using the information.


I was initially puzzled, but then I went back and looked at my quickly-dashed-off blog post yesterday, and saw that I had indeed quoted a posted report from Vike and simply noted it was an "online source."

Mea culpa, despite the fact that I have referenced Vike in previous posts, acknowledging him as the source for UFO case information. (cf. http://uforum.blogspot.com/2011_01_01_archive.html) in the post "Top Ten Most Interesting UFO Reports in Canada in 2010") And, in our annual Canadian UFO Surveys, Geoff Dittman and I have been careful to give credit to all sources and contributors, including Vike. (cf http://www.canadianuforeport.com/survey/essay/2008surveyessay.pdf)

But this time, because I didn't mention him specifically, he reacts badly and pulls the plug on reporting Canadian UFO sightings in his various blogs.

Well, that'll teach me. I'll just have to continue posting Canadian UFO case info from those who freely share and disseminate case data, and provide details on cases that are reported to Ufology Research and myself.

Maybe this could have been averted through a simple email or phone call.

A few more reports came in over the weekend:

From MUFON, a report from Carman, Manitoba, (about 50 miles from me as the crow flies):

The UFO was just lights without shape; the lights were symmetrical descending in a cone like shape but the lines were broken up. The object was heading North, and was not going fast. I only saw it when it appeared and then it flew across the sky for about 5 seconds then disappeared. It did not seem to far up in the atmosphere and was very clear... I was very freaked out, and was only about two houses away from my own, and after I watched it I ran home, and called my friend immediately.

Then, on April 2, over Bowen Island, BC, from an online source:

I stepped outside again for another smoke and like every night since December, I looked up. And again I believe I saw the same thing, but this time it seemed much farther away and I couldn't quite verify it. (What I saw was a massive triangle. It had three red lights on each corner with a blue/white-ish light in the middle.)

On April 21, a family in Coquitlam, BC, saw three glowing lights, like "fire in the sky."

And finally, a person in Toronto sent me a link to two "orbs" she managed to video on the same day, one in the daytime and the other at night, both on April 21, 2011. The former looks like a bird and I'm not sure about the latter. (Are they "orbs" if they're black in colour and seen during the day?)

And the UFO reports come a-tricklin' in...

While you're waiting for the non-news about an FBI flying saucer memo to die down (it's not a new memo, it's been around for more than a decade and was even published in some books, for gosh sake - and what's more, it's a reference to a flying saucer hoax that was popularized in Frank Scully's book!), here's a new UFO report, hot off the ether:

My mother called to me from the balcony, so my grandmother and I went to see what she wanted. She pointed to a strange large dim light sitting silently in the sky. We came to the conclusion that it wasn't a star or planet because after a few minutes of motionlessness, it started a very slow, upward motion. I watched for a few more minutes and decided to return inside and continue watching from the window. By the time I got there, it was gone. We saw a very similar thing just a few nights ago, except that time it was moving slowly from west to east on a very direct path. There were possibly some other lights flashing but I'm not sure, I was more concerned about watching its movement and trying to see clearly exactly what it was.

I appreciate the witness taking the time to report this formally. It helps our research.

It's common to have the number of UFO reports wax and wane throughout a year, in addition to a yearly fluctuation. It's just that it's very slow right now compared with the beginning of 2011.

We had a record number of sightings in Canada in January, about average in February, then the number dropped like a stone for March, and April is barely a whisper.

That's what people really are reporting. Some UFO sites are going on about "mass UFO sightings," which simply aren't happening, and I have no idea why they're claiming it. MUFON, NUFORC and other UFO reporting sites don't reflect anything like what would be needed for such claims.

But that's not to say that UFO reports have gone away completely. I received a report this morning, for example:

I was on the 32 bus waiting for it to leave at Eglinton west station then I looked to my left and saw red and blue lights. It was like a triangle shape, blinking, but it was a saucer. I saw the side of it and it was hovering towards I think downtown Toronto or Bathurst area. I totally forgot that I had my camera phone and didn't think to get a picture of it. After that sighting I couldn't believe what I saw and didn't understand why everyone else on the bus didn't even notice.

It's possible that UFO report numbers are down because there are more pressing things to worry about now, such as the Japanese crises, American government shutdown, Canadian election, Manitoba floods, Libyan civil war, and so forth. Historically, however, UFO report numbers do not dry up at times like these.

Oh, and that FBI document about crashed saucers? Old news. Nothing of substance there.