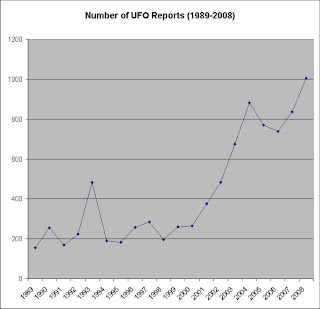 Israel Shoots Down a UFO - The Music Video

When I talk about "the UFO Phenomenon," I don't just refer to the sighting reports. It's all the "other stuff" that makes the topic a cultural phenomenon. The books, magazines, ufozines, conferences, meetups, Facebook pages, Tweets and so much more. It's the people; the way the subject is embraced by individuals across the globe and across all demographics. It's a topic about which everyone has an opinion, one way or another, and everyone seems to know someone who has seen a UFO, if not themselves.

And all that explains why, mere hours after a news story broke that the Israeli Air Force shot down a UFO over a nuclear plant, a song and music video went up on Youtube.

What else is there to say about this?

010 saw a curious crop of books related to UFOs and related phenomena offered to a public eager to know more about their subject of choice. Most were awful. In fact, with the proliferation of books published direct-to-digital, the access to inaccurate and pointless information is better than ever. Any books that noted "pyramids," "Atlantis" and "beamships" in their titles, subheads or tables of contents were immediately excluded from eligibility in this list because they really didn't add anything to knowledge about the nature of the UFO phenomenon. (Similarly, "Federation of Light," "emissaries" and "channelling.")

The good news is that some new books published in 2010 were outstanding, and definitely fill a void that needs filling. Curiously, many were chronologies or lists of cases or events, providing documentation and sources that might have otherwise gone astray.

Here are my picks for the Top 10 Most Interesting (nb: not necessarily "Best") UFO Books of 2010:

1. Kean, Leslie. UFOs: Generals, Pilots, and Government Officials Go On the Record. Harmony Books: NY.
This one is the best of the year. Well-written, informative, and it infuriated debunkers as well. Couldn't ask for much more.
http://www.amazon.com/UFOs-Generals-Pilots-Government-Officials/dp/0307716848/ref=sr_1_1?ie=UTF8&s=books&qid=1292516300&sr=1-1

2. Vallee, Jacques and Aubeck, Chris. Wonders in the Sky. Penguin: NY.
A sequel of sorts to Passport to Magonia, Vallee teamed up with Aubeck to produce a highly detailed cross between The Book of the Damned and the Fortean Times' Classical Corner.
http://www.amazon.com/Wonders-Sky-Unexplained-Objects-Antiquity/dp/1585428205/ref=sr_1_1?ie=UTF8&s=books&qid=1292516355&sr=1-1

3. Feindt, Carl. UFOs and Water. Xlibris Corporation: http://www.xlibris.com
A paper version of his wonderful website, Feindt has produced a self-published work similar in nature to that of Vallee, listing hundreds of cases where UFOs and aliens seem to have an attraction to water.
http://www.amazon.com/UFOs-Water-Physical-Accounts-Eyewitnesses/dp/145009533X/ref=sr_1_1?ie=UTF8&s=books&qid=1292516384&sr=1-1

4. Friedman, Stanton and Marden, Kathleen. Science Was Wrong. New Page Books: Pompton Plains, NJ.
Technically not a UFO book, as such, it's even found in "Science" sections of bookstores. Friedman and Marden authored alternating chapters on a variety of science's shortsightedness, including one on UFOs.
http://www.amazon.com/Science-Was-Wrong-Inventions-Impossible/dp/1601631022/ref=sr_1_1?ie=UTF8&s=books&qid=1292516412&sr=1-1

5. Randle, Kevin, Crash: When UFOs Fall From the Sky. New Page Books: Franklin Lakes, NJ.
Another chronology (do you see the trend here?), this time regarding stories and references to alleged UFO crashes. It's remarkably comprehensive, including many previously unknown sources.
http://www.amazon.com/Crash-History-Incidents-Conspiracies-Cover-Ups/dp/1601631006/ref=sr_1_1?s=books&ie=UTF8&qid=1292516457&sr=1-1

6. Birnes, William. Aliens in America. Adams Media: Avon, Massachusetts.
Focusing on about 20 major cases in the USA during the past 60 years, Birnes gives a short overview plus some speculation, and adds travel and tourism tips for those wanting to visit, say, New Hampshire.
http://www.amazon.com/Aliens-America-Hunters-Extraterrestrial-Hotpspots/dp/1440506280/ref=sr_1_1?ie=UTF8&s=books&qid=1292516482&sr=1-1

7. Goyette, Danielle. OVNIs. Editions Michel Quintin: Waterloo, Quebec.
The only foreign language book included in the list, this is part of a series on paranormal phenomena, looking at cases in Quebec. It is part biography of ufologiste Francois Bourbeau, and part sighting chronology.
http://www.amazon.com/OVNIS-Danielle-Goyette/dp/2894354673/ref=sr_1_1?ie=UTF8&s=books&qid=1292516514&sr=1-1

8. Bullard, Thomas. The Myth and Mystery of UFOs. University Press of Kansas: Lawrence, KS.
Anything by Bullard is a welcome addition to lists like this, especially for his writing, which is literary and more erudite than most. The book is less nuts-and-bolts and more introspective than most other UFO works.
http://www.amazon.com/Myth-Mystery-UFOs-Thomas-Bullard/dp/0700617299/ref=sr_1_1?s=books&ie=UTF8&qid=1292516552&sr=1-1

9. Pilkington, Mark. Mirage Men. Skyhorse Publishing: NY
Included for its slant on the popular interest in conspiracies, Pilkington has produced a work which asks the question, "What?" Is it possible that ufologists are the sane ones?
http://www.amazon.com/Mirage-Men-Adventure-Espionage-Psychological/dp/1602398003/ref=sr_1_1?ie=UTF8&s=books&qid=1292516589&sr=1-1

10. Imbrogno, Philip. Ultraterrestrial Contact: A Paranormal Investigator's Explorations into the Hidden Abduction Epidemic. Llewellyn: Woodbury, MN.
Not quite as good as Files From the Edge, this book is a kind of autobiography of a ufologist as Imbrogno describes his personal investigations into UFO reports and other paranormal experiences, some very weird indeed.
http://www.amazon.com/Ultraterrestrial-Contact-Paranormal-Investigators-Explorations/dp/0738719595/ref=sr_1_1?ie=UTF8&s=books&qid=1292516619&sr=1-1

Yes, I know there were others. Some were pretty good. But for one reason or another, or simply because I couldn't decide on just 10, they were left out. Oh, and I didn't think it ethical to include my own book on UFOs published in 2010 in the list, but there's a link here if anyone is curious.

Great Balls of Fire in Georgia and Ontario

So, I've seen the CNN video of the Georgia UFO, and it looks identical to many others that have been touted this past year or so.

I've seen these before myself, and there's no question they're simply jet contrails at sunset. Why they're labeled as mysterious is more the mystery.

However, I did get a UFO report from Northwestern Ontario recently in which the witness said the object he observed was: "similar to object reported Georgia - CNN."

In this case, however, I doubt it was a contrail. He said it was an "orange-ish, very bright ball, similar to a baseball hat," moving from the northwest heading southeast. It was flying very low, parallel to the ground and traveling just above the treeline at about the speed of an aircraft. It disappeared behind some trees as he was watching it.

The Georgia and Polish objects were observed for a fairly long time, whereas this Ontario object went by relatively quickly. I'd be inclined to think it was an "ordinary" fireball rather than an aircraft.

But you never know. 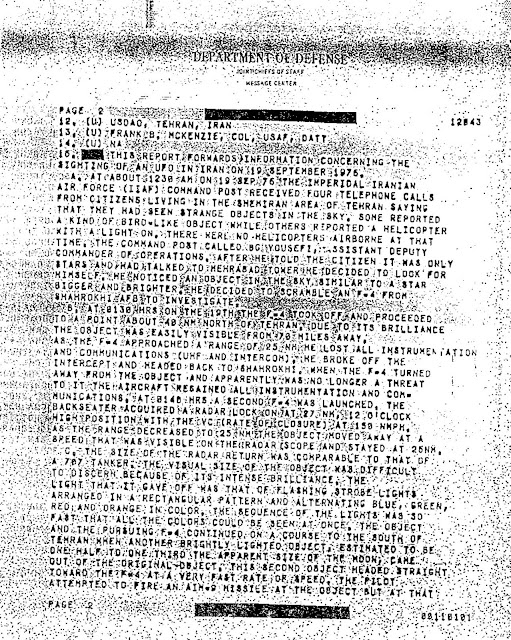