All-time record number of UFO reports in Canada in 2008: study

The 2008 Canadian UFO Survey has been released by the independent, non-profit research organization Ufology Research, based in Manitoba, Canada.
Researchers noted 1,004 UFO reports across Canada in 2008, an increase of 26 per cent over 2007. Reports had been filed by witnesses with government and military agencies, police, civilian UFO groups and online UFO websites.
“We were amazed to discover this many UFO sightings had been reported in 2008,” says Chris Rutkowski, co-author of the study. “This is unprecedented.”
Ufology Research began its national collection and analysis of Canadian UFO reports in 1989, making this the 20th year sightings have been studied. A 20-year longitudinal study of the data will be released later this year.
Of the hundreds of reports in 2008, only about 10 per cent were labeled as unexplained after review. And of these, less than one per cent were “high quality unknowns” that were both unexplained and had above-average levels of investigation and documentation.
Cases ranged from the relatively commonplace reports of starlike lights in the night sky to large, V-shaped craft flying slowly and ponderously over homes in rural or urban areas.
Rutkowski notes that in 2008, hundreds of photos and videos of UFOs in Canada were posted on websites. “But most of these were stars, planets and aircraft rather than alien spacecraft.”
Ufology Research’s statistical analyses of the Canadian UFO data also found details such as that most UFO sightings have two witnesses, most UFOs are white in colour and that the typical UFO sighting in 2008 lasted an average of 18 minutes. What’s more, “flying saucers” are comparatively rare, with reports of triangles and spheres much more common.
Despite the remarkable increase in reported UFO sightings in Canada, Rutkowski cautions that, popular opinion to the contrary, there is still no incontrovertible evidence that some UFO cases involve extraterrestrial contact.
“The continued reporting of UFOs by the public and the increase in numbers of UFO reports suggests a need for further examination of the phenomenon by social, medical and/or physical scientists,” he adds. “This is a fascinating field for study, whether one believes or doubts that UFOs are ‘real.’”

The 2008 Canadian UFO Survey can be found at: http://survey.canadianuforeport.com 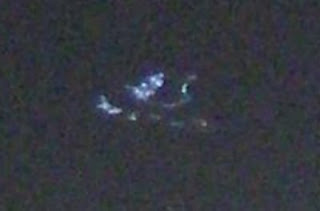